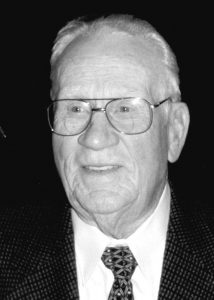 Funeral Services were held 11:00 a.m., Tuesday, February 2, 2021 at the Clinton Chapel Snell-Zornig Funeral Homes and Crematory. Burial was in the Oakland Cemetery with military honors conducted by the Clinton AMVETS Post #28.  Serving as pallbearers were Lee Kibler, Brandon Mink, James Hammond, Dalton Claussen, Jeremy Dankers, and Brady Dankers. Visitation was from 9:00 a.m. to the service time Tuesday at the funeral home. Online condolences may be expressed by visiting his obituary at www.snellzornig.com

Dale Howard Sebens was born on April 2, 1926, in Atwood, Illinois, the son of Frank and Callie (Romine) Sebens.   He was a graduate of Atwood High School. He served in the United States Army during World War II. He married Mary Josephine Larmier on February 6, 1949 in Tuscola, Illinois; she passed away June 12, 1982.   He later married Shirley Ann (Davidson) Kibler on June 18, 1983 in Tuscola.

Dale enjoyed farming for over 55 years; retiring in 2000. He was a member of the First Congregational Church, American Legion #190, and the Izaac Walton League. He enjoyed nature, traveling with his wife and spending time with his family

Dale is survived by his wife: Shirley of Clinton; his sons: Greg (Karen) Sebens of Atwood, Illinois, Curt (Patsy) Sebens of Dongola, Illinois; step-sons: Dave (Velda) Kibler of Camanche, Iowa and Richard Kibler of Ft. Myers Beach, Florida; his daughter-in-law: Cheryl Sebens of Nobelsville, Indiana; two grandchildren, six step-grandchildren; and 12 great-grandchildren.   He was preceded in death by his parents, his first wife, his son: Alan, one brother, and two sisters.

Memorials can be made to the First Congregational Church or the Izaac Walton League.