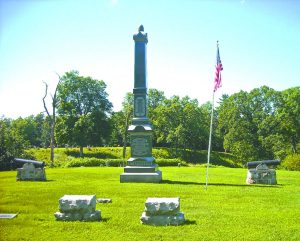 By Tony Hooker
On the first floor of the Douglas County Courthouse sits the GAR (Grand Army of the Republic) room, offering testimony to those from Douglas County who served during the Civil War.  Those who fought changed the outcome of the war in their own ways, and through their struggles and sacrifices, made certain that the United States would remain whole.

As time passes, the men and women of this period of great strife tend to be forgotten, and the GAR room serves to hold them forever in our memory.  This will be the first in a series of stories about the GAR, the room and the history of service of those from Douglas County who served.  Most of the materials which I’ll be sharing come from Chuck Knox, whose personal interest in the GAR room stems not only from a love of history, but from a personal connection, as his great grandfather is featured in the GAR room.

The History of the Grand Army of the Republic
The Grand Army of the Republic was founded in 1866 in Decatur, Illinois by a gentleman named Benjamin F. Stephenson, according to the Sons of Union Veterans of the Civil War web page.  Stevenson, who had served as surgeon for the 14th Illinois Infantry.  He was with the regiment through all it’s campaigns as part of the Army of Tennessee, serving such distinction at the battle of Shiloh that Illinois Governor Richard Yates saw fit to commission him as a Major.  During the three years of service before the 14th was mustered out on June 24, 1864, Stephenson had many conversations with his tent mate and good friend, Regiment Chaplain Rev. W.J Rutledge about what the future held for the men and boys in the Union Armies, and the idea of the Grand Army of the Republic took root from these discussions.

Finally, On April 6, 1866, Dr. Stephenson and 12 Charter Members formed Post Number 1 of the GAR, and Dr. Stephenson then worked tirelessly to promote the formation of other posts.  At the first national encampment, held in Indianapolis, IN. he was appointed Adjutant General and served the organization until his death on August 30, 1871.  He is interred in the Soldiers plot in Rose Hill Cemetery, in Petersburg, IL.

Once it began, the GAR grew at a tremendous rate.  Membership was limited to those who served in the Union Army, Navy, Marine Corps or the Revenue Cutter Service between April 12, 1861 and April 9, 1865, and by 1890 more than 409,000 veterans were counted amongst its ranks.

Each community organization was known as a post, and each post was numbered within a larger department.  Most posts had a name, and rules governing the naming stated that the post should be named to honor a deceased member, and that no two posts within a department would have the same name.  The departments generally consisted of all posts within a state, and were operated at the national level by a commander in chief.

Post commanders, as well as junior and senior Vice Commanders, were elected, as were members of the council.  Members were voted into the post via the Masonic system of casting “black balls or white balls”.  When a candidate was rejected, the rejection was reported to the department staff, and maintained in a “black book” at each post meeting place.  The meeting rituals and induction of members were quite similar to Masonic rituals and were passed down to those who came after, including the Sons of Union Veterans of the Civil War.

At the center of the official body of the Department was the annual encampment, which was presided over by the elected department commander, senior and junior vice commanders and the council. Encampments took place over several days, and typically included campouts, formal dinners and memorial events.  These events were often held in conjunction with the Encampments of the allied orders, including the Camps of the Sons of Veterans Reserve, which at the time were quasi-military in nature, according to the GAR webpage.  The National Encampment of the Grand Army of the Republic was presided over by an elected Commander in Chief, who was elected in political events that mirrored national political party conventions. The Senior and Junior Vice Commanders in Chief and the national Council of Administration were also elected at these events.

Over time, the GAR founded soldier’s homes, were active in relief work, and cemetery construction and in pension reform legislation.  Five members of the GAR later were elected as President of the United States, including Ulysses S. Grant, Rutherford B. Hayes, James A. Garfield, Chester A. Arthur; Benjamin Harrison, and William McKinley, giving testament to the political clout that the organization eventually acquired.

The final encampment of the GAR was held in 1949 in Indianapolis, and the last member of the GAR, Albert Woolson, died in 1956.