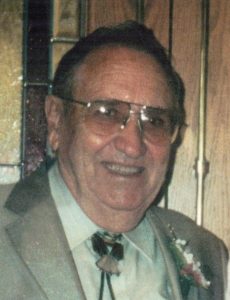 Robert D. Jolley, 97, of Tuscola, IL, passed away at 8:50 p.m., Wednesday, January 20, 2021 at his residence.
Graveside Services with military rites accorded will be held at the Tuscola Township Cemetery with Rev. Joseph Carter officiating.
Mr. Jolley was born on March 14, 1923 in Tuscola, the son of George L. and Lottie Young Jolley. He married Betty J. Ferguson on August 20, 1941 at. St. Charles, MO. She preceded him in death on March 20, 2011.
Survivors include his sons: Jerry Jolley of Tuscola and Andy (Carol) Jolley of Heyworth, IL., five grandchildren: Jason (Amy) Jolley, Leigh Ann Cloud, Travis (Gina) Jolley, Tyler (Neina) Jolley and David (Elizabeth) Jolley, 11 great-grandchildren: Cody, Samantha, Cory, Hunter, Dominik, Cheyanne, Haley, Gabriella, Olivia, Sebastian and Kendalyn, nine great-great-grandchildren.
He was preceded by his parents, two brothers, daughter-in-law: Donna Jolley.
Bob served his country in the US Navy and US Army during World War II in the South Pacific. He received two Purple Hearts and four bronze stars. Bob was a lifetime member of the VFW and American Legion.
He retired from USI Chemical Company, Tuscola, IL where he worked as a welder for over 30 years. He was a member of the Iron Workers Union. He was also a licensed private pilot.
Memorials are suggested to the VFW or American Legion Posts.
Hilligoss Shrader Funeral Home is in charge of the arrangements. Online condolences may be shared via hilligossshraderfh.com