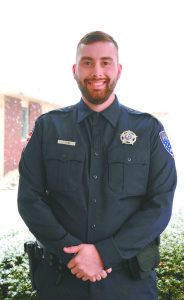 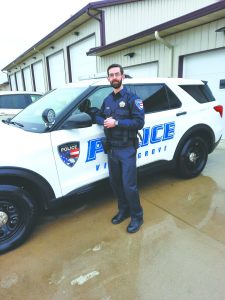 Photo: Tony Hooker
Derek Rasmussen is ready to roll in his new position as a Villa Grove police officer.

By Tony Hooker
Even with all the turmoil and seemingly endless attacks on police, who seem to be painted with a wide brush, based on the actions of very few,  thankfully, there are still those men and women who continue to want to serve their communities as law enforcement officers.   Last Friday, two such young men graduated from the Police Training Institute, and will begin their service to Villa Grove on Monday.  I recently sat down with Patrick Webb and Derek Rasmussen to discuss their reasons for joining the force, how their training has progressed, and a great many other things.

Officer Webb
Tomorrow’s the big day, graduation from PTI.  Where did you rank in the class?

I grew up in Hammond.

Did you go to Atwood Hammond, or had it become ALAH when you were in school?

No, it was still Atwood Hammond.

When did you know that you wanted to become a police officer?

It’s hard to answer because there was no one in my family who was in law enforcement.  I just always had this urge where I wanted to help people.  I wanted to be a police officer.  I don’t know where it came from, but I’ve known for my whole life that I wanted to do something like this.

Were you one of those guys who drew police cars and dressed up like a police officer every year for Halloween?

I don’t know about that! <smiles>  Growing up, all kids play cops and robbers, and I always wanted to be the police officer.  <both laugh>

Do you think the desire to help people is why you wanted to be a police officer?

My dad worked in health care, so I think that’s what drew me into that.  I was on the fire department because my dad was on there, so I’ve just always been around that type of wanting to help people.

Kind of that public service sort of thing?

Yes, I knew I wanted to do something in this line.  Like I told Chief Rea, I want to be that cop that you see on the news, playing basketball with kids in the street.

With all of the current turmoil, has that given you any second thoughts about a career as a police officer?

Yes and no.  First of all, I try not to watch any of that.  Of course, seeing all the hatred directed towards police officers can make some question it, but at the end of the day, it’s something I’ve always wanted to do and I know the type of person that I am inside.  I know I’ll be good at it because I can talk to people?

Tell me about PTI.  What was the biggest surprise for you?

The biggest surprise… I want to say the Covid restrictions.  It made it a lot different but it still gave us the experience of that sort of training.  For example, because of the restrictions, we couldn’t hand cuff anyone, really.  PTI has been nothing but great.  I learned a lot and it was a great experience.

Not really.  It had its moments where it was tough on us, but this is something I want so it came pretty easy to me.

Is there something about it that someone who’s considering becoming a police officer should know?

You’ve got to want it.  It’s not easy. You have to study and you have to know the law and know what it takes to be a police officer.  Someone just coming off the streets who doesn’t want to put forth the effort isn’t going to reap the rewards.

Was it physically demanding?

Because of Covid, we couldn’t really do a lot of the physical stuff.  We did run a lot in PT. (physical training) <laughs> We ran more than I’ve ever ran before.  I loved seeing how far my body could go.  We ran for 50 minutes one day, and I never thought I could do that.

What do you hope to accomplish in your first year as a police officer in Villa Grove?

First off, I want to gain the community’s trust.  Probably not a lot of people know me, being from Atwood Hammond, so I hope to talk to as many people as I can and just gain their trust?

Are there any professional goals that you wish to attain that first year?

I do have a few.  I got marksmanship at PTI, and I’m hoping to better that through continued training. I would like to become a taser instructor.  Chief is throwing around the idea of getting an in-house taser instructor, and if he does, I would be interested in that.

What about 10 years from now?  Do you have any professional goals?

My all-time goal in law enforcement is to become a canine officer.  When I was growing up, I always wanted a German Shepherd, but my mom and dad didn’t want a 90-pound dog in the house, so I decided that when I become a police officer I will work toward becoming a canine officer.

What are your initial impressions of Chief Rea?

He knows his stuff, doesn’t he?

Are you going to be stuck working all the graveyard shifts when you get started?  Is that how it works?

Yea, but I want the graveyard shift because that will work better with my life outside of work.

I’m excited. I’ve been looking forward to this, and I’m ready to get started and work with whoever’s training me and work with the public.

Officer Rasmussen
When did you decide that you wanted to become a police officer?

It started in 4th grade. I decided I wanted to be an FBI agent but by High School, I really disliked school and regretfully quit applying myself and decided I didn’t want to go to college. Then I was trying to decide between being a police officer or a firefighter. My manager at that time convinced me to consider business management which I did. After some time, it wasn’t fulfilling what I wanted and a few people said I should consider being a cop, so I thought it was meant to be and I better do it before it’s too late and I regret it.

How has the recent turmoil influenced your decision?

I’m always up for a new challenge and these events just help push me to be the best cop I can be. In my opinion, some of the turmoil has valid reasons and some does not. We can always make changes and improve. With the most recent controversy with legislation I support some of the points and not others. I hope we can end up meeting in the middle somewhere so it works for everyone. Ultimately the Oath we took doesn’t change and neither will my efforts.

What was the best thing about PTI?

I enjoy meeting people and learning new things. PTI gave me the opportunity to meet and learn from a handful of very knowledgeable instructors as well as 59 other new police officers from all over the state.

Was it difficult? Why or why not?

I didn’t think the rest was too difficult but not something you can just skate through. I guess my interest in the material and drive to learn combined with previous life experience and knowledge gained from friends who are cops helped it not seem too bad. The hardest part was all the time away from family. Physically it was not too difficult. Part of that was because we were limited in what we could do because of COVID.

Where do you see yourself in 1 year?

The way I see it, PTI provided a solid foundation, it’s my job to build on that and the first year will be crucial to that. That said, my goal is to become a respectable well-molded officer through experience, self-learning, extra training, and choosing good mentors to learn from.

10 years gets into some uncertainty, but I’ve got a couple ideas. I know I want to work somewhere larger to afford myself more opportunities and growth. I’m planning to focus here for at least 3 years then work on lateraling to either the Champaign area or Tennessee.

What was your first impression of Chief Rea?

I plead the fifth, lol! I had some discussion with him prior to applying and perceived him to be proactive and eager to progress the department. It seemed he’d be a leader who would be authoritative with reasonable expectations, but also remain approachable and respectful. Then I started PTI and heard many compliments about him. As a matter of fact, within the first hour one of the instructors noticed I would be working for him and said “ Oh you’ll be working for Chief Rea. I knew him well, you’re in good hands.”

Yea, Villa Grove is home to me and pretty much always has been. Please feel free to approach or stop me with any questions, concerns, or just an introduction. I have been a member of the fire department for almost 13 years and an EMT on the local ambulance for the last 3 years. Many of you put your trust in me in those positions (sometimes more than I trusted myself) and I hope that transfers with me into this position. To close I would like to add during the recent turmoil I noticed the vast majority of you expressing your support for law enforcement and that is appreciated. I look forward to this opportunity to continue serving this community.