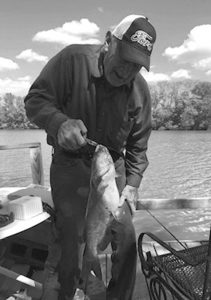 He was born to Leo and Helen (Goldstein) Sudkamp on November 19, 1930 in Urbana with his twin brother Gerald. He survives along with his sister, Mary Ann Hartsfield, of Savoy. James was preceded in death by his parents and older brother Donald Sudkamp.

James attended Champaign High School and served in the United States Navy. He married Zula Mae Eaton on September 20, 1960. She preceded him in death in 2004.

Mr. Sudkamp had many careers during his lifetime. He was involved in construction of the State Farm Center, built his own home, and loved to build things. Mr. Sudkamp even worked on his own home well into his late 80’s, much to the despise of his family, and had a love of making large rooms into small rooms. He owned his own video game and arcade route, Ace Music. James raised pigeons and traveled to many Pigeon shows in Indiana, Kentucky, and a big one in Chicago. He retired to Lake Sara in Effingham and was an avid fisherman. He enjoyed watching Illini sports, Cubs baseball, car shows, auctions, antiques, and gardening. James also loved watching Westerns such as Bonanza, McClintock, and Gun Smoke and he was especially fond of ones starring John Wayne, Roy Rogers, and Gene Autry. Mr. Sudkamp was a member of the VFW, Knights of Columbus, and the American Legion. Jim was a wonderful father, grandfather, and great-grandfather.

Later, in 2012, Jim married Anna May Partenheimer and she preceded him in death in 2017.

Memorials in James’s name can be made to the American Legion or the Tuscola Moose Lodge.

Services will be private. Hilligoss Shrader Funeral Home, Tuscola, IL is assisting the family with the arrangements. Online condolences may be shared via hilligossshraderfh.com