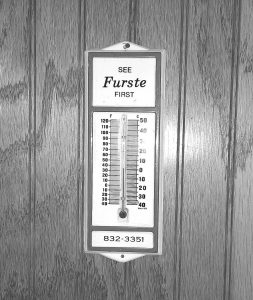 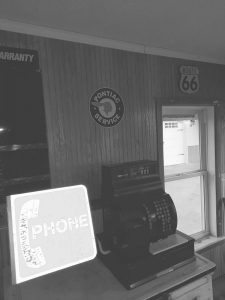 By Tony Hooker
It’s no wonder that Brian Carr has an interest in history.  His dad, Pat Carr, was the long time librarian at Villa Grove Schools.  For Brian, however, his historical interests are a bit different than his father’s.  Brian has an active interest in all revolving around automotive history, so when an opportunity arose for him to gain possession of the former Villa Grove Star gas station, he couldn’t resist.  He recently took time to talk to me about how that came to be, along with how the restoration process has been going.

What was the station originally called?

To my understanding, it was called Star Gasoline, and we’re still trying to determine if it was affiliated with Texaco and their star, or if it was an independent gas company.

What was your connection?  Why did you feel compelled to remodel it?

As a kid, I do remember it.  I don’t remember it as a gas station, but because I’m into antique cars and nostalgia from the automotive industry, I’ve noticed that there have been a few gas stations that people have restored.  Down in Effingham, Mike Yeager, with the Corvettes, has a restored 1940’s gas station. I knew it had been a gas station, and my brother in law, Mike Beccue, lived just one street over from Main street, and he remembered his dad sending him to get gasoline for the lawn mower.  I knew it had that gas station heritage and I didn’t want to see it fall into total disrepair.  The city had used it for a number of years, and we did some checking and determined that structurally, there was enough there that we could save it.

Do you think that your affinity for nostalgia and history comes from your dad being a librarian?

He was a historian, but he was never a car guy.  He drove a car purely for transportation! <smiles>  He wasn’t into sports cars or muscle cars or anything like that.  My Grandfather on my mother’s side Blain Rhodes, was always into cars though.

What did you drive in high school?

I drove a ’72 Datsun pickup truck.

No, but I had worked laying asphalt on the interstate and made enough money in a couple of summers to buy it from Fred Fleener.  Fred was in my brother’s class and he had it. It had oversized wheels and some slots on it and I thought it was a cool looking truck.  I didn’t realize how small they were, back then.

Have you heard any surprising stories about the Star Station?  Has anyone told you any specific stories that they have about it?

I haven’t found any former employees, but there’s been a lot of commentary about what happened to “the little Santa house”.  Steve Vandeventer made arrangements and had it moved for me so we could start the remodeling process, and I think that caused a lot of people to wonder what happened to it.  Was it destroyed or what?  I worked with the city, made arrangements to move it and so we moved it and because of the connection I had with the original family (The Aments, who lived next door to the Carrs when they first moved to Villa Grove) and they’ve provided some information about the history. I hope to find out more, frankly.  I’d like to make more of a connection with them and maybe even have an idea of what it looked like on the inside.  Right now, I’m just speculating.  I put in the calendar and the cabinet, and some of that memorabilia, but I don’t know if it’s accurate or not.

Do you have any idea of when it was in operation?

From the best I can tell from the cars in some of the pictures, maybe the 20’s to the 50’s.  It looked like all they did was gas, and no maintenance.  There was no rack or anything like that.  From the photos, it looks like that alley behind Andrews (Now Lake’s Machine Shop) was more of a road than just an alley. I remember it more as a beauty shop, but I do remember it being a barber shop. We didn’t go there though, we usually went to Frenchie’s or my mom cut our hair, but I do remember it being there. Someone told me that at one time, there were 4 or 5 gas stations on Main street in Villa Grove.  You had the Sinclair Station across from the community building.  PT’s coin shop was a gas station, you had Star, where Pete Chambers was used to be a gas station, and Bruce Allen said that where his Oasis gaming room is used to be a gas station.  (According to local historian Chuck Knox, Lester Owens was the first to operate a barber shop in the Star building, and he also noted that PT’s coin shop had previously been a Shell Station)  Then Standard started, and Paul Heneghan had Skelly’s and Vic and Helen Crawford had the Marathon Station, and there was the Shell Station, too.

I’m surprised that the Star and the station where PT’s is located were so close.

The other thing that surprises me is how little signage is on the building in the old pictures.  When you look at pictures of a lot of old stations, there is a lot of signage, but not on the Star.

Is that your next phase?

I am going to put some signage on it so that people recognize it as a gas station.  I’ve got a line on an antique gas pump.  One of the neighbors has told me he would like to help me out and so we’ll get that.  I’m not sure we’re going to leave it in that exact spot, but it will be out here on the farm, somewhere.

Is the pump one of those big tall ones with the long hose?

No, the one I have will be more of a round top.  it won’t be one of those where you pump gas into the glass top, like the one that Tom Bretz has. That’s even vintage before this place.  I’d like to get one of those signs where you can put something like nineteen cents a gallon on it.  There is a big market right now for all of this gas station merchandise.  Even Mecum’s (Mecum Auction, the largest auto auctioneer in the world) has gotten into it.  A lot of that stuff, even the old glass jars with oil lids, have gone out of sight.

Do you have any practical use for it?

There’s really no practical use for it.  The grandkids love to go in and play in it.  I’ve had a few people want to stop and look at it.  Some people have taken their cars and put them in front of it and taken pictures of it.

Is there anything you would like to add about the station?

I saw it as a historical treasure.  I knew the heritage and the history, and because I’m an automotive historian, I talked to Mike Yeager about his, I just decided it was something I should do.  It’s not valuable or anything.  I think if there wasn’t a Villa Grove connection, I would have been a lot less likely to do it.  I did it just because it had that automotive connection, not because it was a barber shop! <laughs>