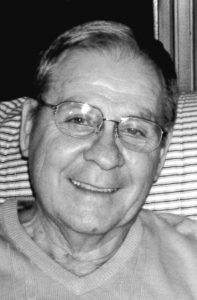 Private funeral services were held on Thursday, January 7, 2021 at the Edwards Funeral Home. Rev. Paul Froese officiated. Military Rites were conducted by the Arcola Honor Guard at the funeral home.  Burial was in the Arcola Cemetery at a later date. Friends could pay their respects to Fred and sign the register book between the hours of 1:00 p.m and 4:00 p.m. on Thursday, January 7, 2021 at the funeral home.

He was preceded in death by his parents, one son, Michael Gene Harvey, and two sisters, Cora and Nellie.

Fred was an Army Veteran of the Korean War.

He attended the First Apostolic Church in Arthur, IL.

Fred had been a member of the Kaskaskia Country Club, he was an avid golfer, he enjoyed doing yard work, he loved classic country music, he helped many people with their taxes, as he was a “real numbers guy”.

Fred was a regular at coffee, being a long-time member of Arrol’s Coffee Club, frequenting the Dutch Kitchen, the Dairy Queen and most recently McDonalds. He always liked to visit and catch-up with good friends.

In lieu of flowers memorials may be made to the Michael G. Harvey fund in care of the Arcola Foundation or the Arcola Lions Club.