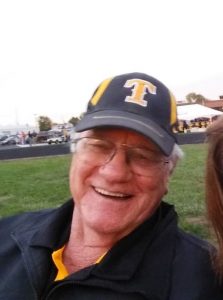 avid G. Lohr, 82, of Tuscola, passed away at 7:36 p.m. Saturday, January 2, 2021, at Carle Foundation Hospital in Urbana.
Services will be announced at a later date. Hilligoss Shrader Funeral Home in Tuscola has been entrusted with arrangements.
Mr. Lohr was born May 20, 1938, in Alton, the son of Lester and Emma Mowery Lohr. He married Barbara E. Rowe on April 21, 1962, in Alton. She survives.
Also surviving are two daughters, Christine (Richard) VanDyke of Indianapolis, Ind., and Cynthia Lohr of Tuscola; grandchildren, Virginia and Wyatt VanDyke; brother, Ken Lohr (partner, Mary Sue) of Mahtomedi, Minn.; sister-in-law, Lilas Lohr, Booneville, Ind.
He was preceded in death by his parents and a brother, Victor Lohr.
Mr. Lohr had been a gas line repairman for CILCO in Tuscola. In his typical modesty, he described his work as “digging holes and filling them.”
His passion was baseball, and for more than 40 years, Mr. Lohr was the face of Tuscom Little League in Tuscola. He coached baseball and served as district administrator for Little League throughout east central Illinois. He also was instrumental in promoting softball and recruiting girls for Little League baseball. He served as the “player agent” providing a voice for the school-age players.
Known affectionately as “the old man” by his players, due to his white hair, he was the consummate coach paying particular attention to players who lacked skills and strong, male role models. His players recall that “dadgummit” was the coarsest epithet he ever used.
While in the hospital, Mr. Lohr would ask every nurse and doctor if they had kids who played baseball and reveled in telling stories about Little League. He even met his wife through baseball. He was playing in a church league when Barb noticed him on the field and somehow stole his wallet as a means to meet him. She then stole his heart as they were married after a brief courtship.
Mr. Lohr was also a member of the “chain gang” working football games for the Tuscola Warriors for many years.
Memorials are suggested to Tuscom Little League or the Tuscola POW-WOWS.
Mr. Lohr was a member of the Tuscola First Christian Church.