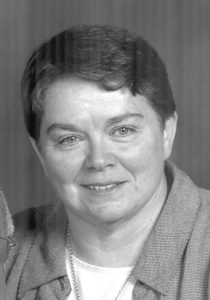 Mrs. Manzella was born April 3, 1949 in Peoria, IL, the daughter of Leo and Anida Blough Finnegan.

Mary was preceded in death by her parents and siblings: Mike Finnegan, Susan Matarelli and Tim Finnegan.

Mary grew up on West Florence Avenue in Peoria, the third of nine children born to Irish Catholic parents who both served their country during World War II. She graduated high school from Peoria Spalding Academyin 1967. Soon after graduation she moved to the Champaign-Urbana area to join her sister Sharon and Rick living in Orchard Downs.

Mary worked at a money exchange desk located in Campus Town Florist on Green Street. One day while paying a visit to her friend who worked at a small but mighty family-owned restaurant called Manzella’s Italian Patio, Mary met the love of her life, Tony Manzella. A courtship began, but was soon cut short when Tony was drafted into the US Army and shipped off to the Vietnam War. When Tony returned to the states, they were married on September 6, 1968 in Champaign.

As their family began to grow with the birth of three sons, Mary continued to work in various capacities alongside her husband. These included places like Tony’s Lunch Restaurant, Manzella’s Italian Patio, then to Liga’s Restaurant in Tuscola. In 1985, Mary and Tony branched out to Fisher, where they owned and operated Manzella’s Restaurant for 11 years. They returned to Tuscola in 1996, when Mary established a daycare business which she operated for several years.

Mary had a love for children which made her popular at family gatherings. She always had games and entertainment for her nieces and nephews. She served as a mediator amongst the cousins to keep the peace.

Mary enjoyed sewing, loved watching Shirley Temple movies and had quite the collection of turtles.

Mary especially loved her family and time spent with her grandkids. She witnessed their growth first hand often serving as their very first babysitter. It gave great peace of mind to her working daughter-in-law’s knowing they were in good hands with Nanna.