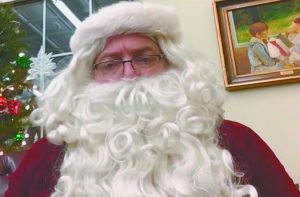 By Tony Hooker
This week, it brings me great pleasure to “interview” the man of the hour, Santa Claus, who along with his intrepid team of Reindeer, has been bringing joy to children around the world for a very long time. He’s a tough man to pin down, but once we started the interview, I found him to be quite a joy to work with, especially since his answers align so closely with my own beliefs. (wink, wink)

Ho Ho Ho!  Worst year ever?  That’s a tough one to say.  The pandemic has certainly been terrible, but you have to remember that I’ve been around in some iteration for about 1740 years.  I’ve seen some stuff, let me tell you. Besides, thanks to the complete automation of the workshop, I’ve got a lot of free time on my hands these days and I read a lot of science and history books.  I mean, I think this year pales in comparison to 66 million years ago when an asteroid struck the Yucatan Peninsula.  National Geographic says that the impact was the equivalent of 100 trillion tons of TNT exploding.  For comparison’s sake, ALL of the man-made stuff on earth weighs around 30 trillion tons.  The impact incinerated everything in a 625-mile radius, generated 1000-foot-high tsunamis and wiped out an estimated 80 percent of life on earth.  Then 600 mph winds and ash filled skies created the equivalent of a nuclear winter, so that was a bad year. Or epoch, really.   Just 300 odd years before I was born, the library of Alexandra was torched, taking with it an incredible collection of knowledge from around the world.  536 AD was another dark year.  According to the Climate Change Institute at the University of Maine, a cataclysmic Volcano eruption led to climate change which destroyed crops and causes nearly universal starvation.  A few years later, another eruption occurred, which led to an outbreak of the Bubonic Plague which wiped out all of the earth’s economies and 25 percent of the human population.  It wasn’t until 575 AD until things were able to stabilize for a time. 1348 was another bad year, when the Black Death emerged.  Constantinople lost 90 percent of their population in the month of May alone.  Other contenders include 1919, when the Treaty of Versailles, which should have made for a glorious time, was so onerous to the Germans that it laid the seeds for Hitler to come to power.  Also, a second strain of Spanish Flu swept the globe, and in the three-year period between 1918 and 1920, killed between 2.5 and 5.4 percent of the population, depending on whose numbers you trust.  So yes, 2020 has been bad, but I’d be hard pressed to call it the worst year ever.

What’s been the best year ever, in your experience?

Ho, that’s a tough one, and it’s really too subjective to answer, since man has been around for 200,000 years, roughly, and so there’s no way that everyone was universally happy all at once.  According to our friends at Quora Digest, 1665 is in the running, because Newton and gravity became synonymous, Robert Hooke discovered and named “cells” in plants, and several of the greatest philosophers in our history, Hobbes, Milton, Arnauld, Spinoza, were at their peak during this year, and being Santa, I relish a good metaphysical debate.

What a long, strange trip it’s been, to quote one of Mrs. Claus’ least favorite bands.  <smiles>  When I was born, near what is now Demre, in Turkey, my main focus as I became older was on doing Christian good deeds.  I’m sure you’ve heard the story of my paying the dowries of three sisters so that they wouldn’t be sold into slavery or prostitution.  In England, I became Father Christmas, and had a great time serving as the Ghost of Christmas present, scaring the bejeebers out of Ebenezer Scrooge and showing him the true meaning of the season.  Of course, in the Netherlands and Belgium, I’m known as Sinterklaas, and I cruise around those countries on December 6.

It really wasn’t until the 1820’s that the current version of myself became popular, here in the states, especially, after Clement Clark Moore penned a poem know as ‘Twas the Night Before Christmas’ for his three daughters.  That’s when all of the tricks of my trade, the rosy cheeks, the reindeer, the magic ability to go up chimneys, etc. really began to take root.

I was also around in pre-Christian times as well, particularly in the Germanic tribe’s celebration of Yule.  That’s when I became known for my long white beard. Of course, this is also when my old friend Krampus first appeared.  K has gotten the short end of the stick when it comes to Christmas time, as he is usually associated with carrying a bundle of birch switches to smack bad kids with.  Sometimes Krampus gets a little carried away, as do the naughty kids who he encounters.

What are some of your favorite memories, Santa?

Ho, ho, there are so many to choose from.  One particular memory that has stood out for the past 100 years was the Christmas truce of 1914, when German and Allied soldiers met in ‘no man’s land’ between the two sides’ trenches,  shaking hands, exchanging gifts, and even playing a spirited game of soccer, after serenading each other with Christmas carols the night before.  That showed me that the seeds of humanity, even obscured by the clouds of war, can still be found.  Really, though, my heart is filled with so many touching moments, like when a poor child, who has nothing, puts others before himself when making a list. You see, kids are resilient.  This time in their lives might set them back a bit, but I honestly believe that they’ll come back stronger, smarter and kinder than ever, after having to isolate for so long.  To me, the true magic of the Christmas season, which gives me the power to travel everywhere and visit everyone in a single day,  lies in the ability of people all over the world to manifest their love and respect to others through words, and actions as well as the giving of gifts.  That’s the true meaning of Christmas. That’s what has kept me around in my various guises for all these years.

Ho Ho Ho!  Merry Christmas and happy holidays to all!