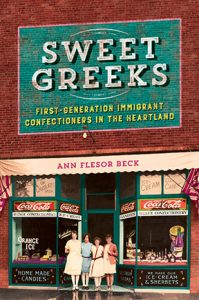 By Kendra Hennis
Gus Flesor came to the United States from Greece in 1901. His journey led him to Tuscola, Illinois, where he learned the confectioner’s trade and opened a business that still stands on Main Street. Sweet Greeks sets the story of Gus Flesor’s life as an immigrant in a small town within the larger history of Greek migration to the Midwest.

Ann Flesor Beck’s charming personal account re-creates the atmosphere of her grandfather’s candy kitchen with its odors of chocolate and popcorn and the comings-and-goings of family members. “The Store” represented success while anchoring the business district of Gus’s chosen home. It also embodied the Midwest émigré experience of chain migration, immigrant networking, resistance and outright threats by local townspeople, food-related entrepreneurship, and tensions over whether later generations would take over the business.

Flesor Beck wrote Sweet Greeks as a result of her earning her phD at the University of Illinois. Through the process she was able to learn a lot about other families’ immigration stories to America. She said that she hopes that after hearing her family’s story, others will feel inspired to tell their family’s stories.

Flesor Beck said her grandfather’s story is pretty typical for Greeks at the time. Many males immigrated to the United States and became very successful in the candy business. They would earn money to rent space and make candy, and send back earnings for their families to join them in America. Flesor Beck said that this was a lot of work, which resulted in 40 percent of the Greeks returning to Greece. Those who stayed in America eventually joined the restaurant buisness, bringing about what we know as Flesor’s Candy Kitchen.

Flesor Beck’s story is an excellent American history book. Telling true American history and her family’s coming to America story as well as their own interactions with xenophobia and the KKK. She also recounts her and her sister’s journeys of navigating the candy-making world as women. An engaging blend of family memoir and Midwest history, Sweet Greeks tells how Greeks became candy makers to the nation, one shop at a time.

Sweet Greeks is an excellent last-minute holiday gift and is available for purchase on Amazon and at Flesor’s Candy Kitchen on Main Street in Tuscola.