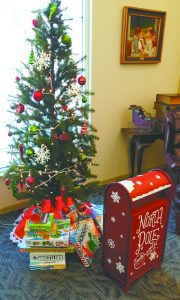 By Tony Hooker
The pandemic has forced many businesses and institutions to change the way they do things.  The ability to adapt could mean the difference between survival and closure.

Jackie Wells, Camargo Township Librarian, is one who has seen the need to continue evolving the functions of the library to meet the needs of its patrons, and she and her industrious team have done just that.  I recently caught up with Jackie to discuss the current goings-on at the library, and what we can expect in the near future.

What sort of things have you been doing to keep your “people” engaged during this strange time?

Well, when the weather was nicer, we tried to have outside story time, either at the park or behind the library.  We even did an outside adult craft time, but since the weather has gotten colder and the mitigations have changed, we’ve been focused on many more “to go” crafts.  As an example, tomorrow some of the ladies will be picking up a to go Santa craft that we had planned to do in November and it didn’t pan out.  The board is concerned about having people in house to do crafts, so we’re making up kits.  As a matter of fact, the girls (Tommie Hooker and Olivia Kieffer, library employees) are down there now making up the kits so the ladies can pick them up.  We’re doing online story time, and I just talked to Kim Johnson at head start and they might have the kids watch online storytime, so I’m going to take some “make your own snow” kits down there so when they watch it, if they want to do the kits they’ll have them.  One thing we’re going to do, which I wish I could take credit for it but I got the idea from the Library Think Tank, is boredom bundles.  It worked out really well because Karla Westray contacted several people in her circle to donate board games because they knew that this is a different time in our history and maybe people will be playing more games during family time.  She asked if she could do that and have them donated to the library, so we have close to 30 board games that have been donated to us, and then Don and Linda Foster and their daughter Cammy donate money to the library every year instead of exchanging gifts, in honor of each other.  We took some of that money and bought things to go in the boredom bundles, some craft stuff, these little magnetic drawing boards, glitter and all kinds of stuff. We bought some snacks and hot chocolate to put in there, so next week, we’ll be making up these boredom bundles and people can come by the library and pick one up for their family.

Are there any parameters for distribution?  Who are these for?

It’s for anyone in the community, especially for those with children.  Kristin Markel is going to help me film a promo for the event. We’re going to ask people who want one how many kids are in their family, because you don’ t want three craft kits if there are four kids.  It’s really just for families.  We hope that anyone in the community who wants one will call and let us know.  We’re pretty excited about it.  I wasn’t sure what to do with 30 board games, but then I read about these boredom bundles and realized that it was going to be pretty nice for us to be able to do this for our community?

How has your circulation been impacted?

It’s down a few hundred a month, compared to pre-pandemic, and we did have to adjust our hours again this December, but surprisingly, we’ve stayed very busy.  We’ve had to shorten our hours on Saturdays and close on Wednesdays for sanitation and cleaning, but surprisingly we do still check out a lot of books.  Not so much with the movies, because there haven’t been any new releases so a lot of people who used to check out DVD’s are doing so.

Right! They’ve seen them all.  <smiles>  We are still able to borrow from other libraries but it takes a while because they’re making them set for seven days before handling them in the system.  If Tuscola has a book, we tell people that we can put a hold on it and they can go over there to pick it up, or they can wait seven days to pick it up here.  We are trying to look at Tuscola, Tolono, Newman, but a lot of libraries are closed.  We were closed for six weeks and then in May, we decided to open by appointment only, a couple days a week.  Then, in June, we decided to open and I called all over the country, asking if they were open and how they were doing it.  We thought we put together a pretty good game plan where we were going to be safe and our patrons were going to be safe so we decided that we were going to open our doors.

Are you going to be doing kids crafts?

We had some kids crafts that we handed out.  We haven’t really done an online kids craft.  It’s funny because in the early stages of the pandemic, a lot of our videos and stuff like that would get lots of hits.  Last spring, we set kits out and people would come and get them. For these last few, not too many people have come to get them, so we’re trying to re-start it.

Anything on the horizon that you can think of?

We’re going to have a story time with Mrs. Claus posted on our Facebook on Christmas Eve.  I don’t know what we’re going to do next week.  We’re trying to get someone from the public to come in and read. The family of Madeline Howard had an estate sale, and they were kind enough to donate over $1000 dollars to our library, and we were able to purchase an I-Pad to record these story times on.  I’ve seen other posts where people are able to use their I-Pads and do a green screen and make it appear as though the person is flying, but I’m not there yet! <laughs>  I haven’t gone to film directors’ school!

For you personally, how is school going?

Good!  I just got my final grade for the semester and I got a 100 percent.  My professor said that she enjoyed watching my writing progress.  We had to do a five-part paper in five separate sections, and then meld it all together with a conclusion. I was pretty nervous,  but she actually emailed me and asked if I was going to be taking any of her classes in the spring.

What degree are you pursuing?

It’s called a Library Technical Assistant Associate’s in Applied Science, but then after that you can keep going and get advanced degrees in library science.  I’m thinking about that, but I might be a thousand years old before I finish!  <smiles>

I want to give a shout out to my staff, because they just go along with almost every hare-brained idea that I have. <laughing>  They are always saying “Yes! I’ll help you!”  They help me with all sorts of things.  They worked with Santa to answer the letters that kids dropped off in the box at the Christmas Tree Lighting Festival,  and they discovered that several didn’t have return addresses on them, so I assured Santa that if the parents of a child who dropped off a letter didn’t get an answer, that they could contact the library and I would stay in touch with the big man, himself. <smiles>   We appreciate everything the community has done to support us.  They’ve been patient, they’ve been kind.  They’ve been so appreciative of the fact that we’re trying to stay open.  It’s been really hard, because before the pandemic, I had started a lot of outreach projects at Head Start, at the preschool and the school had just contacted me about coming out there once a month.  I was talking to the mayor about starting a once a week program at the senior center.  We had just finished setting our teen area up and it was being used heavily during the week after school.  It’s been really hard to see that go away, but I’m just really thankful that we’re still here and we have the doors open.