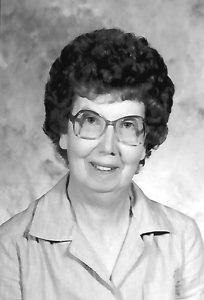 Ruth was born on July 13, 1921 to Frank and Clara (McCrory) Hathaway in Crawford County. She married Jake Conn on March 1, 1949 at the Villa Grove United Methodist Church.  Jake passed away in 1983.

Ruth graduated from Hutsonville High School in 1939.  She then attended Eastern Illinois University to pursue a degree in Education and graduated in 1943.  Her first job was at the Villa Grove High School, and she remained there teaching for her entire career.  Ruth was also an active member at the United Methodist Church in Villa Grove.

She was preceded in death by her parents, husband, one daughter Teresa (Butch) Peuvion, four sisters, and two brothers.

In lieu of flowers, memorial donations may be made to the Villa Grove High School or the World War II Memorial (1750 Independence Ave SW Washington, DC 20024).