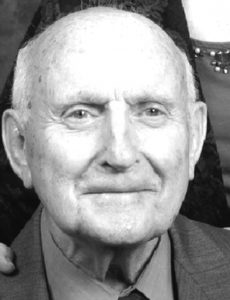 A visitation for friends and family was held at First Christian Church Saturday, December 12, 2020 at 1 p.m. with funeral services following at 2 p.m. where Pastor Mike Zylstra officiated. Burial followed at the Villa Grove Cemetery.  IDPH COVID safety guidelines will be strictly enforced.

Bob graduated from Villa Grove High School in 1955 and was a long-time member of Villa Grove First Christian Church. Over the years he served as Elder, Deacon, Sunday school teacher, and sang in the choir. He had a beautiful tenor voice. Bob was also a member of The Gideons International, doing his part to bring the Word of Christ to all. Bob truly lived out his Christian vocation by being an example to everyone he met sharing his wonderful smile, quick wit, wisdom, humility and unconditional love.

Bob also loved his country. He served in the Army from 1959-1962 where he was a surgical technician.  In these early years, he also accomplished his pilot license and loved being in the air and airplanes.

Bob worked at USI Tuscola, before starting his own Construction business. He was well known for his high-quality construction and work ethic.  Later in life, he rounded out his work career as Chief Building Engineer at the Illini Union, retiring from there.

He enjoyed hunting, fishing and was an all-around animal lover.  He also enjoyed gardening and being on the farm. His family was his highest priority.