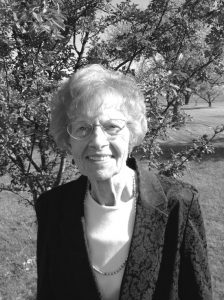 Gwen was born at home on June 26, 1928, in Mattoon, to Mildred Lucille Kibler Kilman and Kenneth Monroe Kilman.  She married Kenneth Eugene Watts on March 11, 1949, in Mattoon, and they were married for 42 years before his death on November 3, 1991.

Gwen was affectionately known as Gigi to her eight great-grandchildren, Paxton Watts, Olivia and Ethan Wood, Hazel and Fiona Wood, Axylle and Joveigh Miller, and Drew and Lennon Watts.   She is also survived by nephews, David Wilson, Kevin and Kenney Kilman and (favorite) niece, Susie Wilson.

Gwen was a lifelong member of the First Christian Church, where she sang in the choir for almost 40 years, and was an interim pianist for church services. She was also pianist for the junior high Sunday school class for several years.

Gwen and her husband, Ken, shared their joy of traveling by taking a family vacation every summer, and were fortunate to have visited all of the continental US, with the exception of Vermont and Maine. One of their favorite trips was their cruise from Seattle to ports in Alaska. They equally enjoyed 8 other cruises to ports in South America and the Caribbean. Later, Gwen often traveled with different groups to Europe, where she visited 16 countries.

Gwen was a devoted wife, mother, grandmother, great-grandmother and friend who enjoyed sharing special times with her family who will always cherish memories of the quality time she spent with them.  Her positive attitude was an inspiration to all.

It is requested that any thoughtful donations in her memory be made to First Christian Church of Mattoon or an organization of the donor’s choice. Online condolences may be expressed at www.schillingfuneralhome.net or Schilling Funeral Home’s Facebook page.