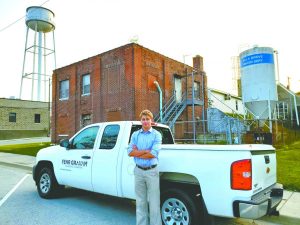 By Tony Hooker
For Cameron Johns, helping his dad, Brad, farm without going off on his own, at least for a while, was never his plan.

Luckily for him, his surpassing intellect and drive to excel have allowed him to do just that.  Johns,  a 2020 UIUC engineering graduate who recently began his career with Fehr Graham Engineering and Environmental in Champaign, did discover that all roads lead to home, as his first project with the firm was the demolition of the old water plant, right here in his home town of Villa Grove.  I recently sat down with the 2016 VGHS grad, who along with his twin sister Emma served as co-Valedictorian of his class.

Cameron, what area of engineering did you study at UIUC?

My major was Civil Engineering, but within that I’m a structural primary, which means I’m focused on what’s actually holding the structure up.  In Civil Engineering, you can go into water management, environmental engineering or transportation, controlling traffic flow.

When did you know you wanted to be an engineer?

I always liked building things, I loved Legos, loved Minecraft, and I looked at engineers around me and thought that they looked successful and I’d like to emulate that! <laughs>  It was as simple as that!

Was there a teacher at VGHS who fanned that flame?

I’d have to say it was one of my relatives, Jake Wolfe, who pointed me toward civil engineering, rather than a specific teacher. I definitely had a lot of good teachers. I had a lot of great math teachers, Mrs. Henderson, Mr. Burner and Mr. Murawski who helped speed me along the engineering path.

For those of us who aren’t engineers, the discipline is highly math centric, correct?

What other traits make a good engineer?

Knowing how to study.  Knowing when you have to design slash figure something out yourself versus referencing something that’s already done to save time.  Time management is very important because you have to keep things moving, even when it’s a very long project.  You definitely can’t slow down and maybe speed up toward the end like you do when studying for a test. You have to be able to work consistently.

I am. They’re a structural and environmental firm in Southwest Champaign.  They do a lot of wastewater and water management projects.  They do a lot of projects for small towns in the area.  That’s kind of how I landed the job.  I was going through company lists for the job fair, trying to figure out what I could meet and speak with and I saw Villa Grove and thought “shoot, I kind of have to talk to them, don’t I?”. <smiles>   Doing work in my hometown!  I met with them and they said they didn’t think they had any positions, but a month or two later, I had forgotten about it, but I got a call from them saying they’d like for me to come and do an interview, and I ended up doing my internship there.

And now, bringing it full circle, you’re now working on a local project?

Full circle.  I asked if I could start working there right when COVID was hitting, and they said “sure.”  They put me on a project right here in Villa Grove!  That was very convenient for the commute!

How does that work?  Do you have to go to the office and then come to the job site?

The majority of my work was in the office, but I did have to come to Villa Grove a couple of times to get the measurements of the plant.  I think I spent a total of two days here.  It was kind of weird.  I ran into a couple of people, like Zach Dahl, who I hadn’t seen in four years.

What goes into safely and efficiently deconstructing a plant that’s 100 years old like that?

Thankfully, it’s a lot easier than building something, because you don’t have to worry about it holding it up in the future.  The main thing is to make sure that all the utilities, electric, gas, water, are shut off, and then you have to make sure that you’re demolishing it in a way that won’t damage any of the surrounding structures.  We didn’t want to have it fall on the plane! <laughs>  Actually, that wasn’t really a concern because of the distance, but we do have power poles, and the streets, so we have to specify what order to destroy it in and which direction they should knock it.  My part was mostly drawing the plans, and I was working with Andrew Kiser, and he helped me with some of the questions, like “what utilities are involved?” and “Is there asbestos?”

That was going to be my next question.  Are you involved in any sort of hazardous material mitigation?

I’m not involved in reporting or recording any of that, but it was something that I had to know to add to the plans.  That was one of my primary concerns, and there was a little bit in the building.

With a 100-year-old plant, it would have been surprising if there hadn’t been any, right?

Where do you see yourself five years, ten years down the road?  Will it be Fehr Graham & Johns?

Maybe.  <laughs> I honestly don’t know yet.  I have to do my FE (Fundamentals of Engineering) test. Then, I have to have four years of experience before I can take my structural engineering test, which is a big one, something like 16 hours long.  I’m also considering whether or not I should go to grad school.

How long have you been working for Fehr Graham?

What’s been the most positive thing about it?

For me, definitely the learning, having real world experience on a job versus learning from books.  You start working and it’s like “oh my God, I’ve forgotten everything,”  and then it’s like “no, no I remember things!”

Has there been anything negative for your recent experiences?

Not really.  I kind of knew what I was getting into based on my internship.  One of the most fun things I did was I got to explore a tunnel in a local facility.  That was pretty cool.

How about your personal life?  Anything going on there?

<laughs>  Not much, unfortunately!  I don’t have any time for it.  I’ve been trying to get out and do some stuff and I’m trying to get involved with habitat for humanity, but it’s not an ideal time for any of that.

My teachers at Villa Grove, especially my math teachers, gave me a head start by challenging me.  I love those guys.