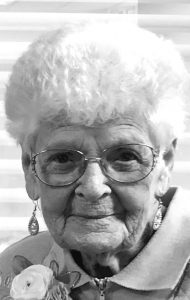 She was born on August 1, 1919 to Newt and Lillie Belle (Reinoehl) Phillips.  Her mother passed away shortly after Thelma was born, so she was raised by her loving family, Aunt Belle and Uncle Walt, Aunt Dora and Uncle Mac, and Aunt Emma and Denver Howe.

Thelma graduated from Villa Grove High School in 1937 and was active in the VG Alumni Association from 1937-2014.  She went to work for P.O. Fogerson from 1937-1947.  Thelma married her high school sweetheart, Jack Harris McNussen, in Missouri on October 30, 1941.  While Jack served in WWII, he sent home $25.00 for her birthday. She bought golf clubs and joined the Villa Grove Country Club.  Later, she and Jack managed the club from 1966-1970.  Thelma and Jack spent their retirement years wintering in Florida enjoying the sunshine and playing golf.

Thelma was preceded in death by her parents and her husband.

Thelma lived her last six years at Autumn Fields in Savoy, IL.  We would like to thank them for such a wonderful place to live and all the staff for the great care that they gave to Thelma and her family, especially these last few months.  We would also like to thank Transitions Hospice for their end of life expertise and the great care they gave to Thelma and her family.

A graveside service was held at 1:00 p.m. on Wednesday, November 18, 2020 at the Villa Grove Cemetery.  Pastor Duane Piercy officiated.