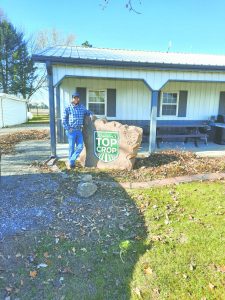 By Tony Hooker
Growing up in Villa Grove and the surrounding communities, detasseling for Watsons was an adolescent rite of passage.  In light of the harvest season that is in full swing, I thought it would be nice to catch up with Jason Watson, who along with cousin Adam now operates Watson’s Top Crop, a company started by their grandfather Reider Watson nearly 70 years ago.

How long have the Watsons been farming in the area?

So, you’re the third generation of Watsons to farm this land?

Third generation down here in Villa Grove.  We came from a farming family up in DeKalb, IL.

I’m sure the industry hasn’t changed at all in the last 60 years, right? <laughs>

The industry has changed dramatically, even in my 17 or 18 years of farming.  We talk about it every year. We don’t know if conditions are really right, but we want to make sure that our equipment’s really working and we want to be able to really roll when things get going, and we can go out and plant as much trying to get the planter set as my grandpa was farming.  Obviously, technology has changed in so many ways, from the equipment, the computers, the office work has been very dramatic, and there’s so much more that I really can’t wait to get here.  I really want to touch on the technologies of the equipment the most.  GPS steering. RTK (Real Time Kinematic) satellite technology is probably my favorite edition.  High speed planting is another one.  Everything is out there.  One of the things that as a seedsman I like to mention is that I’m never proud of the costs of the seed that I’m selling, but I’m selling genetic gain every year.  I’m buying the same fertilizer that my grandpa used in 1956.  The seed that we’re planting is very much genetically improved.  The price of fertilizer has gone up, but we’re still using NPK and lime, the same stuff that farmers have been using for fifty years.  The genetics are improving and we really saw that this year with the conditions that the seedlings were able to withstand, their ability to resist drought, fight diseases, is pretty cool stuff. Where farming has really changed the most is in our ability to collect and dissect data and make decisions based on it.

Do you have any idea how many kids DE tasseled for Watson Farms?

It started with my grandpa and my dad and then Adam and I did it for a while, and we rolled it over to Brad Osborne, one of our farm employees, and Darryl Rice, a neighbor friend.  My dad, Jerry, would love to do something, and if I were a good son, I would get on Facebook and start a page where everyone who detasseled for Watson Farms over the years could reconnect!  I know that there were years when we had 150 kids or more. Dad started it in the late seventies or early eighties.   I don’t think we ever took a family vacation, we’re talking Florida or Colorado or anywhere that we didn’t run into someone who knew my dad from detasseling.  Then it became fun when we started getting the second generation of detasselers, kids whose parents had worked for us.  We’re in the thousands, easily.

Are you still in the detasseling business?

We’re no longer in the business.  After the drought of 2012, seed production in the area became scarce.  They wanted to add to the stability of their production corn by going to irrigated acres.  Once the production corn left, the detasseling went with it.  On another note, I’m not sure we could find the kids to do it, these days.  Back when we were doing it, travel sports weren’t a thing.  You didn’t play 62 softball games a year.  In those days, everybody from school was detasseling and you wanted to be a part of it.  I remember back then, my dad was my little league coach, and practically my entire team detasseled, so we were together all day long.  We’d come out and work all day, go to the ball game, then go to someone’s pool party after the game and then be back at work at 6:30 in the morning and do it all again.  It was a special thing.

How long have you been affiliated with Channel Seed?

We are starting our fourth sale season with Channel.  Pioneer was a good fit for Jerry and Jeff Watson, and we found that Channel was a perfect fit for Adam and I.  Channel is the Bayer version of farmer serviced and sold.  The Dekalb brand is sold through retail locations, and Channel is sold by farmer dealers in a more hands on, neighborly seed sales approach.

What do you think the future holds?

I think that the writing is on the wall and that we’re going to have to increase our stewardship of the land, moving forward.  This is our first year of planting a cover crop. We’re slowly beginning to dabble into that and other conservation management and better stewardship of the land.  I still think the leg work is getting all your fundamentals in place first.  We’re better at understanding soils and fertilities and things like that.  We’re testing for more micronutrients than ever before.  We talked about NPK and pH, but Boron and Sulfur and Zinc are becoming the new frontier.  Drainage management is nothing new, but it’s still one of the main players out there.  You have to get as much of the fundamentals in place, but we’re obviously still interested in efficiency of scale.  There are really two paths to take.  You can be a niche grower or go the route of being very efficient.  We do both.  We grow seed beans, white and yellow food grade corn for Frito Lay, and those types of crops come with premiums, and we also go large scale efficiency.  The two types of farming sort of interweave with each other.  Imaging is coming more and more into play with the drones and being able to identify diseases and figure out how to address those.  The equipment just keeps getting smarter and better.  Planter technology is so important.  Steve Hettinger could talk to you about that for days! <smiles>  We only get one chance to place the seed in the ground. It’s critical to have each seed placed at the same depth and distance to promote natural competition.  We’ll continue to advance methods of applying nutrients to the seed.  Of course, the game of farming is understanding the rules and regulations that are going to be put on us.  I think regulation is going to drive the path forward for agriculture more than anything else.  At what point in time am I going to be restricted to x amount of nutrients per acre.  When that day comes, I want to be as prepared as possible.

It’s always going to be beans and corn?

I think that’s the way we’re set up around here.  If we would ever get some sort of large processing plant to come in, I think farmers would love that opportunity.  It’s not that we’re restricted to that.  I can’t really grow pumpkins in large scale.  I think Hemp is another one that comes up. What do you do with it if you grow it? There are all sorts of things that go into it.  For us, I see our operation being focused on Corn and Soybeans for the immediate future.

You really grow five different crops within those two, right?

We talk about that.  With the white corn, the yellow food grade corn and our different soybeans we really feel that we’re working with five different crops, almost.

It is not. We do spray it.  We’re growing a more sustainable crop, with a lower impact on the environment than truly organic crops.  Our food grade crops are being managed very closely.

There is one thing, and maybe it’s just because it’s election day, but farmers are wanting to stand up to the mistreatment from China.  The thing that’s scariest is that they are stealing our trade secrets, our genetics, all the things that we’ve spent billions researching, and they’ve just stolen it from us. It’s very important to our farming future that we preserve its value.

Is there another Watson being groomed to take over some day?

There is! <smiles>  I have a two-year-old who’s very interested in the combine.  He came out and rode with me for hours during harvest.  He points and shouts at every semi that goes by and he gets really excited when the auger kicks in and starts filling the cart.  He’s showing some early interest in it. No pressure from dad or anything, but he’s showing some interest! <smiles>