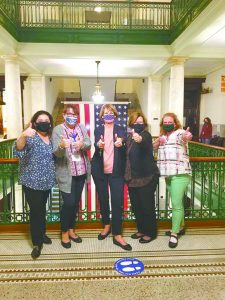 By Kendra Hennis
This year has been nothing but unpredictable, and this year’s general election has surely been no different. Americans sat on the edge of their seats for nearly five days waiting to see who would be the next President-elect. On Saturday morning it was declared that Joe Biden had been awarded the 270 electoral votes needed to declare him the next President of the United States.

In Douglas County we are almost buttoned-up, only awaiting on 99 potential mail-in ballots. This year we saw a record number of 73.65 percent of voters turnout. There are 11,940 registered voters in Douglas County, and 8,749 of them voted this year. 1,700 of those voters chose to vote by mail.

The success of Election Day in Douglas County is in large part due to Douglas County Clerk Judi Pollock and her team. On the election, Pollock said, “I cannot say enough about my election judges and how they handled all the changes in polling place layout, additional PPE along with IDPH guidelines.  They were absolute troopers and never complained.  I also had a limited number of extra workers for sanitation and offering masks at the door and they were wonderful too.

Our voters were patient during the early voting process in our office and were very good to follow the guidelines that were required for social distancing and wearing a mask.  The reports that I got from the judges were the voters were upbeat and very appreciative they could go to the polls and very good with complying with the changes that were in place.

All in all with all the changes to the law the election was great.  Super turnout 73.65 percent, biggest turnout in years!  I will say that I am glad that part is over, lots of reporting to finish in the next two weeks, but much calmer in our office for sure.  This election seemed to go on forever, matter of fact a solid seven and a half months of planning for this one, lots of decisions and changes and on my part a little doubt at the last minute if I had done enough.

Last but not least, Hats off to my extraordinary staff who dug their heels in and just did it!  I can say we were absolutely on a dead run in this office for six weeks and they never complained one time. Sure glad that one is almost behind me!”

* Voted no to the Illinois Allow for Graduated Income Tax Amendment.

Editor’s Note: Official results included are those reported November 8 at 12 p.m. The election will not be final until November 17.