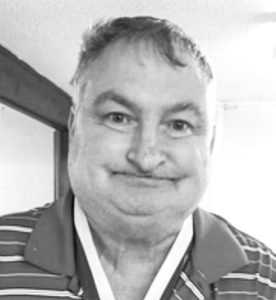 Funeral services were held at 2 p.m. Thursday, October 29, at Hilligoss Shrader Funeral Home, 705 S. Main St., Tuscola. The Rev. Kenneth Roedder officiated. Visitation was one hour prior to the funeral at the funeral home. Burial followed in the Tuscola Township Cemetery. Face masks were requested along with social distancing due to the coronavirus pandemic.

Mr. Bowles was a special person, a loving brother, and was always happy to help people. He enjoyed talking on his C.B. radio. He graduated from Villa Grove High School and lived with his parents in Tuscola until their deaths. He worked at Kelsey Furniture’s warehouse in Tuscola, delivered newspapers for the Champaign News-Gazette and through CCAR in Charleston, a non-profit that assists individuals with developmental disabilities.

After his parents’ deaths, he lived with his siblings and in a group home in Bloomington before moving to Brother James Court in Springfield, which is a residential intermediate care facility for men with developmental disabilities. He settled in after being assured that Santa Claus would still be able to find him there. While there, he worked for Goodwill Industries.

Memorials are suggested to a charity of the donor’s choice.