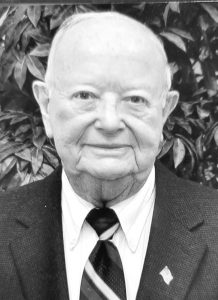 Earl was born in Effingham County, IL to Ella Myrtle (Bronson) and Louis Rufus Hamilton on June 15, 1930. He graduated from Lovington High School in 1948 and played on a nationally recognized football team with his brother Don in 1946. He attended Illinois State University, Normal and Millikin University, Decatur. Earl served in the US Army as a Corporal in Military Police in occupies Germany and France from 1951 until 1953.

On July 2, 1954 he married Lela June Lewis. They were married for 66 years. Earl worked at USI in Tuscola for 28 years. After retiring from USI he was employed as a field officer at the State of Illinois Office of Veteran’s Affairs for 15 years. He was a volunteer fireman for the Atwood Fire Department, Civil Defense director for the Village of Atwood and township supervisor for Garrett Township.

Earl also served on the Police Pension Review Board for the City of Urbana. He was an active member of the James Reeder American Legion Post #770, serving as commander, district commander and honor guard member. He volunteered with the Special Olympics competition at ISU.

He was a member of the Forty and Eight La Society des Quarante Hommes et Huit Chevaux. Working with the organization to provide nursing scholarships for students pursuing degrees in nursing.

Celebration of Life Services will be held at a later date.

Hilligoss Shrader Funeral Home, Atwood, IL is entrusted with the arrangements. Online condolences may be shared via hilligossshraderfh.com