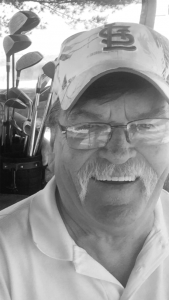 Paul Fauke of Tuscola, passed away on Sunday, October 18., 2020 at Lutheran General Hospital in Park Ridge, Illinois with his family at his side.

Paul was born on May 25, 1950 to Herman and Anita (Ziegler) Fauke in Effingham County, IL.

Paul was preceded in death by both of his parents Herman and Anita, his brother Emmanuel, nephew Michael Fauke and his beloved Aunt Lenora Ziegler.

Paul was a 1968 graduate of Tuscola High School. After graduation, he served his country in the military branch of the U.S. Navy. At the time of his retirement he was employed with CHI in Arthur.

Paul loved to spend time on the golf course with his friends and daughters. He enjoyed fishing, woodworking, and was a loyal fan of the St. Louis Cardinals.

Funeral services will be held at 11:00 a.m., Saturday, October 24, 2020 at the Immanuel Lutheran Church, 600 East Northline Road, Tuscola, with visitation one hour prior to the services at the church. Burial will follow at the Tuscola Township Cemetery with military graveside rites accorded.

Social distancing will be required during the services.

Memorials are suggested to the Lewy Body Dementia Association.