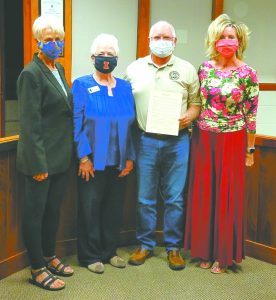 By Kendra Hennis
The meeting of the Tuscola City Council was called to order on Tuesday, October 13 at 7:30 p.m. Councilmember Dave Slaughter was absent from the meeting and Tim Hoey joined via Zoom.

Following the approval of the consent agenda, the council welcomed visitor Sean Conner of Toys for Tots. Conner was there to discuss toy collection on November 14 from 8 a.m. to 12 p.m. on the corners of Sale and Main Street, as well as the mall exits. Connor was pleased to announce that out of the 18.6 million toys that were given to 7.3 million children last year, Douglas County provided 3,192 toys and 400 books that helped 441 children. Connor noted that they will by conducting this year’s drive as safely as possible by using masks, hand sanitizer, and other protective equipment.

Connor also joined on behalf of the T.K. Martin Memorial Post 10009, Veterans of Foreign Affairs. Connor came to ask about temporary street closure for a Veteran’s Day Parade. There will be a brief ceremony at the Courthouse beginning at 11 a.m. which will lead into a parade down from the north end exit of the Courthouse on Houghton Street and turn onto Main Street where they will proceed to the entrance of Ervin Park. Once at the park, a dedication will take place with Tuscola Serves and the military service signs will be formally introduced to the public. Mayor Kleiss then thanked Carmen Morgan for all of her hard work in bringing Tuscola Serves to town, as well as her approach to doing so. He said that Morgan came to the council with a plan and worked really hard, allowing the project to be completed quickly. Morgan thanked him and reported to the council that the signs looked great and were almost finished being installed.

Mayor Kleiss then proclaimed November 1 as National Family Literacy Day in Tuscola, IL. The day was brought to the Mayor’s attention by the National Society of the Daughters of the American Revolution, the Stephen A. Douglas Illinois Chapter. National Family Literacy Day was established in 1994 and highlights the importance of reading and learning for the entire family and emphasizes the impact that parents have on the child’s learning. The goal is “to underscore the importance of literacy, celebrate the joy of reading, encourage residents to promote literacy by reading together as a family, and to extend deep appreciation to our local librarians, educators, and literacy service providers for their tireless efforts to strengthen the literacy of our children and community.”

Mayor Kleiss followed by extending his sympathy on behalf of the city to the family of Joe Slaughter on his passing. Kleiss noted that, “Joe was a wonderful guy with a positive attitude” and went on to talk about all of the good that he did for Tuscola and our country, serving in WWII where he was awarded a Bronze Star, Purple Heart, and four silver battle stars.

The council then discussed the Ironhorse Drainage Project. City Administrator Drew Hoel reported that he had received confirmation that the drainage project can still proceed in compliance with the bond process and objectification period that goes along with it. The city is working on a bid opening in time for the November 23 city council meeting. Assuming that the city receives an acceptable low bid in accordance with the project estimate, they can file a property tax levy for the Special Service Area by the end of the December deadline. Upon acceptance of the bid, the city would also start the 90-day objection period for the bond issue. The contract will provide for spring construction and will also have time to abate in the property tax levy before the end of the March deadline. Hoel noted that he is optimistic about the project moving forward.

Mayor Kleiss then reminded the citizens of Tuscola that if they would like to opt out of Homefield Energy, they could do so at any time by calling Homefield Energy. Hoel said that while it is a good rate, it is only an option and others can be explored on the Homefield Energy website. Residents are already enrolled in the program so they are happy with their services they need to do nothing. Treasurer Alta Long also reminded residents that recycling is now included under the new contract with Advanced Disposal. If you received a separate recycling bill, call Advanced Disposal and let them know that you are within Tuscola’s city contract for a free bin and recycling.

* Approved the minutes of the September 28 meeting.

* Approved the Meals for Veterans 5K Run route for November 21. There will be a $15 entrance fee and all proceeds are going towards Thanksgiving meals for Veterans. Racers should report to Rally Point Fitness on Route 36 at 7:30 a.m. They will then line up on the corner of US Route 36 and Main Street at 8 a.m. to begin their race down Main Street, around the park, and back up Parke Street to Rally Point Fitness.

* Approved a $950 contract with Utility Service Company for water tower inspection. The inspection is required by IPA and will consist of a full internal and external inspection and report from the company.

* Approved a $125 holiday bonus for all City of Tuscola employees.