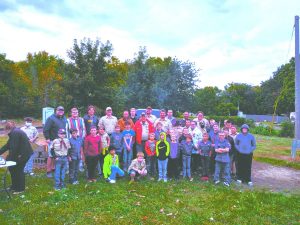 By Tony Hooker
Due to some highly publicized abuse claims and settlements, the Boy Scouts of America has gotten a bad reputation, which in the cases of abuse, is richly deserved. However, in my experience, the vast overwhelming majority of scout leaders are involved simply to help young men gain confidence and to grow as people.

One such gentleman is Larry Vandeveer, who recently decided to step down as a scout leader, after nearly two decades in the role.  I recently caught up with Mr. Vandeveer to discuss his time with the scouts.

How long were you a scout leader here in Villa Grove?

Did you get involved because of your grandchildren?

When my daughter moved here from Monticello, she wanted me to go with him to scout meetings because he had been involved in scouts previously, and I’ve been involved since then.

Were you a scout when you were a kid?

I was a wild kid, and my probation officer was Jennie Spindel from Taylorville, who was probably my best friend at the time. I got in trouble a couple of times so I had to go to boy scouts.  That was one of my punishments I guess.  I went to work for the scout leader and he gave me $.50 a day, my scout book and lunch, and he had me picking corn from the ground all day. <laughs>

Did scouting help you get on the straight and narrow?

I think it had a small part in it.  What really got me on the straight and narrow was when I first got married and had a daughter.  I thought “what am I going to tell her if I get caught?”  That, along with the Air Force, more or less straightened me out. <smiles>

When and where did you serve?

What was your AFSC?

I was an air force policeman for four years.  I played a lot of basketball and softball while I was in there, both for the base team and for the squadron teams.

Due to horrible acts committed by some leaders, the boy scouts’ reputation has suffered immensely.  What would you say to people who might be afraid of that?

I think it’s been blown out of proportion, myself.  I don’t mean to point fingers at anyone, but I don’t think they’ve done the clergy as poorly as they’ve run down the scouts.  I think there are bad scout leaders but I also think there are a lot more good ones.  There are bad people everywhere, and it can be difficult to know who to trust.  You usually work with scout leaders for a while before becoming one yourself, and I never knew any bad leaders.

Any boy needs to be recognized.  If you tell a boy you’re going to go camping and shoot B.B. guns and you don’t go, you might pull it off, but if you do it twice, and you don’t go, you won’t have that boy back.  Boys want you to be truthful and up front with them and talk to them on their level.

Do you think that scouting develops self confidence through that support that they’re given?

I can give you a few examples.  Adam went to Villa Grove school.  He was intelligent but was kind of lazy academically, and he went to Eastern and then graduated from Law school at Illinois.  Matt Cloud is in his fifth year at Elmhurst University.  Ben the youngest, is in his second year at the University of Illinois.  All three of them, my grandsons, were Eagle scouts. These grandsons of mine are awesome!  Alex George was another scout that I had when I was younger who was awesome.  I think that they all need someone to be up front with them.  It’s like I always tell people when they ask me how the cub scouts are.  I always say that they’re ok, but it’s the moms and dads that I worry about.  Some of them still don’t know what time 7:00 is! <laughs>  I expect them to be there to pick up their sons when the big hand is on the 12, not the 4 or 5. <smiling>  I think peer pressure starts in first grade, not in high school, like bullying.  I think bullying starts at home.  We talk about bullying in every meeting we have.  I’ve had kids say “I didn’t know that was bullying,”.  I tell them “You do now, and I would appreciate it if you didn’t do it anymore.”

You mix a lot of fun in with the lessons you give.  What’s your favorite activity that your scouts participate in?

We’ve had bristle bot derbies the last couple years.  You cut the head off a toothbrush and then connect a vibrating motor and a battery to it.  We drew them a schematic and taught them  a little bit about what that represents, like an electrical plan.  We’ve done Legos pinewood derbies.  Everyone knows what the pinewood derby is, but we do a lego pinewood derby.  We take the block of wood from the pinewood derby and cut it down to about a quarter of an inch, and let the boys decorate them with legos.  Some of them are amazing.  I’ve seen them with lights on them.  Pinewood derby seems like it’s a time where dad goes and builds the car he didn’t build when he was younger.  <smiles>  I’ve seen pinewood cars that have better paint jobs than the car I drive!  The kids know more about legos, though, so when they build them, it’s theirs.

What would you tell someone who’s considering having their child join the scouts?

It’s good clean fun.  When they first arrive, there are 30 or 40 kids that are running around being loud.  Where else can you find a place where that many kids can get together and have good, clean fun?  I’ve had other people come up and tell me that they need to be quiet, and I always tell them that they will be.  It’s my belief that they need that little bit of time to unwind.  I don’t want to yell at them, because they’ve probably gotten enough yelling elsewhere.  I go out and do this (holds up two fingers, the universal sign for scouts to be quiet and listen) and someone says “They’re not doing anything,” and I tell them to give me two weeks and they will be. <smiles>  I used to yell at them, but I don’t any more.  We go over the scout law and the scout oath, and they learn that.  There are some homeschooled kids that don’t have an opportunity to be around other kids frequently, and this gives them that chance.  They can make bird houses.  They can make tool boxes.  It’s just good, clean fun.  They make boats and we have a regatta race.  We do an overnight camp out.  We do an indoor camp out.  We’ve camped out in the gym.  We get to do a lot of things that mom and dad might not have time to do with them.

I want to thank Villa Grove for the opportunity that I’ve had to be with their boys. I want to mention that the current leaders are good men and that the troop will remain strong.  I also wanted to mention that every year, the letter carriers have a food drive, and the cub and boy scouts assist them.  In the past year, we’ve collected over a thousand pounds of food for the little Hall food pantry.  The cub scouts go out on a Saturday and pick up the food, and then on Monday or Tuesday, the boy scouts go over and separate the food.