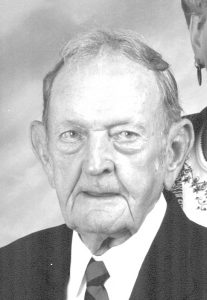 Visitation will be held from 5 to 8 p.m., Tuesday, October 13, 2020 at the funeral home. The family asks that everyone attending please wear a mask and abide by CDC guidelines.

He was preceded in death by his parents and brother: Bill Slaughter and sister: Joyce Taylor Irwin.

Joe has lived in Tuscola for most of his life.  He was a World War II US Army Veteran. Joe entered the service at the age of 18. He trained in Hawaii and served in the Philippines, New Guinea, Morotai Island and Kobe Japan. Joe served as a 1stscout that went out ahead of all the troops to investigate the area. He was awarded a Bronze Star, Purple Heart, and four silver battle stars.

Joe retired from DeKalb at the age of 62, where he had worked for many years. After retirement, Joe served as the crossing guard at North Ward elementary school for many years. Joe over his lifetime has been awarded several awards such as: grand marshal along with his wife Ruth, in the Christmas town parade, volunteer of the year along with his wife Ruth, East Central Illinois area agency of aging volunteer of the year award, quilt from American Legion for being a World War II veteran, and most recently he was awarded a proclamation from Mayor Kleiss of Tuscola when he turned 95 years old on January 3rd calling it Joe Slaughter day, and several other awards. Joe was a very special man who loved his family and friends very much.

He was a devoted husband, father, father-in-law, grandfather, great-grandfather, uncle and friend. He had a great sense of humor and always put a smile on everyone’s face. One of Joe’s special talents was writing poetry. Joe was a big Chicago Bears, Chicago Cubs, and NASCAR fan. Joe loved spending time with his family and sitting on his front porch reminiscing. Joe was a well-respected part of the Tuscola community. He will be greatly missed by all who knew and loved him.

Memorials are suggested to the SAM Food Pantry or Help-A-Child Fund.