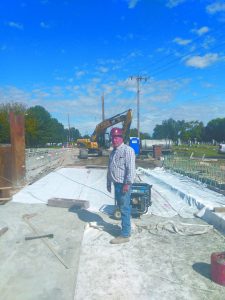 By Tony Hooker
If you’ve ventured from Villa Grove to the north over the last few months, you know that navigating the bridge construction is something less than convenient, to put it mildly.  From stop lights that don’t always change to narrow lanes to huge wear and tear on the road, it’s not been ideal.  For Tony McCullick, it’s all in a day’s work.  McCullick, an employee of Sangamo Construction, is the site supervisor on the project, and he’s been building bridges for nearly decades.  I thought it would be nice to get to know one of the guys in the hard hats, whose hard work is an inconvenience now, but will give years of safe travels to the citizens of Villa Grove once completed.

How long have you been building bridges?

The first bridge I ever worked on was in 1980, working for Shappert Engineering.  From there, I went to Halverson Construction in Springfield.  Now I work for Sangamo.

We were talking earlier about the pipe laser that your crew was using.  Has technology changed a lot in the forty years you’ve been in the industry?

Oh yeah!  The pipe laser’s been around for a while now, but not when I started.

How did you do it, with a five-foot level?

Yep, with a four-foot level, a lot of eyesight and a lot of cussing! <laughs>

How else has the technology evolved?

We do so much more with the excavators now.  We just do what we have to do with cranes, like setting beams and driving pilings and that sort of thing. The excavator’s evolved so much and the hydraulics have gotten so much better that we can use them in so many different ways.

I was born in Wisconsin and I grew up in East Dubuque, IL, just across the river from Dubuque, IA.  That’s where I lived when I started working with Shappert Engineering.

You and some of your crew are sort of nomads through the week, right?

That’s what my wife says! <smiles>

You and some of your crew are staying in rentals here in town.  Is that normally the case?

Once in a while you get lucky and get within an hour or so from home, but most of the time we’re away, unfortunately.  That was especially the case when I worked for Halverson, because they were doing a bridge in Savannah, IL. When I first started working for them, Shappert’s only jobs were in Louisiana, and I didn’t want to go clear to New Orleans, so I went to work for them for two weeks and they made me a labor foreman and two weeks later they made me a superintendent.  That’s when I was 46, and I’ve been a superintendent ever since.

What kind of attributes would you look for if someone was trying to get on your crew?

We do most of our hiring through the local unions, so we call in and ask if we need a laborer, or a carpenter or need an operator.  They send them out and we pretty much get what we get.

I know that the trades have fallen out of favor with younger folks.  What would you say to encourage someone to consider joining a trade union?

First of all, it’s got to be something that you like to do and that you think you’d be suited to do. The first bridge I ever worked on; I knew that’s what I wanted to do.  I really liked it and enjoyed the work and the process of doing it. It’s not easy work.  It’s a lot of physical work, and it’s not easy work.  It’s got to be something you really enjoy, otherwise it’s just a job.

How many bridges have you built?

I have no idea! <smiles> Several hundred, I would have to say. The biggest bridge I ever built was in Morris, IL.  I built a new bridge over the Illinois River.  It was a little over a mile long.

Do you have a favorite bridge?

I’d say my favorite was LaSalle-Peru.  I had four bridges there at once and the piers there were 95 feet tall.  I met a lot of good people up there.

You did the bridge on Interstate 39?

I did the bridge on Interstate 80 over the Little Vermillion.  There were two more to the west and one to the east, in Oglesby, there was one over the Fox River at the same time.

What’s your favorite part of your job?

Really, just conversing with everyone, building the bridge, getting the job done and seeing the results.

What’s your least favorite part of the job?

Can you tell me more about the project?

It’s an interesting project, because there are a lot of different aspects to this little bridge.  For as small as it is, there are a lot of pieces.  We put the new road in for the high school, put the curb in over there.  We’re putting in all the temporary sidewalks, and the sidewalks on both sides of the bridge.  You usually only get those on one side.  There are a lot of little things that have made it an interesting bridge. With the setbacks on getting the sewers moved on time, we would have liked to have had it done this year, but of course that’s not going to happen now.  We’ll finish it up next spring.  It’s a nice little bridge.  It’s got heavy beams on it and they’re all galvanized so they should last a good long time.

How many crewmen are on the job?

And those are all local guys?

We’re allowed to bring in our own foremen, except for the operators.  The operator I have now was on the last job I did, which was four bridges in Lawrenceville.  Before that he was in Clay City with us, so he’s been with us for a while.  He’s a good operator.

Were you involved with the recent bridgework in Hugo?

That was our company, but it was a different superintendent.

You guys that stay here in town all work for Sangamo?

We’ve got a house on the west, a house to the east, and then an apartment uptown that we’ve rented.

Where do you live?

I live north of Springfield, in Petersburg.  Actually it’s between Petersburg and Athens.

Do your kids go to Petersburg Porta?

<laughing> My daughter is 43 and my son is 39! They’re a little beyond high school age!

After forty years, your wife is probably pretty used to the routine, eh?

She’s been putting up with me for forty-four years.  She spends a lot of time with the kids and the grandkids and she takes care of the house.  She’s got a big house to take care of.  <smiles>

What would be a way for someone to get into bridge building?

Go to the local union hall and fill out an application and tell them you’re interested in it.  They’re usually looking for help.  Bridge building is hard work, so it has to be something you enjoy doing.