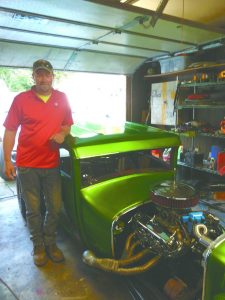 Photo: Tony Hooker
Dennis Birchfield in his garage in front of his 1951 Ford.

By Tony Hooker
For as long as he can remember, Dennis Birchfield has liked cars.  Really souped up, nice cars. So, if you hear a roaring V8 on the streets of VG, there’s a good chance that it might be Dennis in “The Bucket”, “The Grinch”, or in “Fatbackstard”, which are the names of his three hot rods.

What kind of car is this?

It’s a 1951 ford.  It would have been a baseline, base model car.  That’s what it started its life as, anyway. <smiles> My dad and I started this. It was kind of our fun car, but he never got to see it done.  I finished it after he had passed. It didn’t have the suicide doors or louvers.

Was it a four door?

No, it was a two door.  It didn’t have the one-piece doghouse.  The hood opened like normal.  <chuckles>

Do you do your own painting?

Chad Hinton at On the Go Auto painted this car, but we painted it in his garage, and in this garage.  We tore it apart at the house I lived in before this one, and in about two years’ time we sprayed it up and got it going.

Where are you from?

I was born in Watseka, IL.  I grew up in southern Indiana, and I graduated from Urbana.

How did you come to Villa Grove?

My wife and I were looking for a house and we found this home and we fell in love with it.  Villa Grove’s a nice little town.  It’s got everything you need, really.  I worked in Tuscola at Illini FS for 21 years and now I work for Walter’s Buildings, outside of town here.

Yes. All my life.  My first car was a Monte Carlo that was souped up and it’s always been cars since then.  I’ve probably owned a hundred cars since I’ve had my license!

How many do you have now?

I’ve got three hot rods, my jeep out front, a 1975 jeep rock crawler in a garage in Urbana and I’ve got an old Harley.  I always say you need to have a different one for every day of the week! <laughs>

And your wife supports your addiction?

Oh yeah, she loves it.  The T-Bucket is her favorite one.  She likes this one as well. <points at 51 Ford> She goes to car shows with me.  We went to one last weekend.

Do you show your cars or just go to look?

How do you decide which car to take to the show?

It’s pretty tough!  <laughs> This one <The Grinch> won a trophy two weeks ago.  I’ve got a stack of trophies in the basement that this one (51 Ford, Fatbackstard> has won.  It’s fun. I like talking to people about cars, and looking at other people’s cars, getting ideas.

What is this one?

It’s a 1927 Model T <the Grinch> I did all the interior myself.  It was already painted, but I cleaned it up and put all the chrome on it.

Some people like to restore old cars to their original state, but that doesn’t seem like what you’re about.  You seem to like to let your creativity shine through, right?

If it was natural and original when I got it I might, but they never are when I get them.

Which one of your cars is your favorite?

Do you only collect ford hotrods?

No. I’m a car guy.  <smiles> This one’s got a Chevy Motor in it. It’s got a 355 fuel-injected small block in it.  I did the interior in this one.  I painted all the skulls and I did all the foam and the flames and I made the center console.

Why do you keep coming back?  What’s the most attractive part of it for you?

I just like getting in the garage and going to work.  I come up with ideas and then I try them.  I made those headlight covers.  They’re skulls that I molded out of this coffee mug.  I made little jigs out of plywood in the shape of these headlights and then I clamped them in there on the bench and started heating this plexiglass and pressed it onto it and it molded it.  The Turn signal covers are actually speaker covers of an old Harley.  The grille is off a grain elevator bridge that I got from work, and I made a grille out of it.  I used that lace to paint those skulls on there. You paint through the lace and it leaves the skull pattern.  That’s an old hot rod trick.  They used to lace the tops on all those old cars.  It’s just something I like doing.  I’m a carpenter by trade.

You probably won’t be getting behind the wheel of a Prius any time soon?

I doubt it. <smiles> I tell everyone that this is my Prius.  It’s funny that you said that.  It’s just something that I enjoy doing.  I’ve always had fast cars, but I didn’t really start getting into hot rods until about 15 years ago.

What’s your next project?

I really want to build an old truck.  My mom had one with a three on the tree and that’s what I learned to drive. She let me back it up in the driveway.  I traded a ’29 Model A Truck for this <indicates Model T> with Bob McKeehan here in town.  I built it.  I had it almost done, it’s got a wooden top I built, but he wanted it and I wanted this.

Do you have children?

Are any of your offspring hot rodders?

My son wants to be, but he doesn’t do it right now.  He’s always had nice cars.  He’s in the operator’s union over in Indiana, so he’ll get it one day.  It’s a 75 CJ5 that we used to go to badlands in when he was younger.

Where I grew up in Southern Indiana, we didn’t have running water or electricity.  My mom grew big gardens and we canned a lot of food, and I did homework with oil lamps.  I grew up dirt floor poor, and I learned really fast that I didn’t like that.  We had to carry water from the spring down the hill and heat it on the stove to take baths.  I didn’t grow up in the colonial days, so I shouldn’t have grown up that way, but it got me where I was and it makes me appreciate what I have now.  I started on a crew when I was young and I made foreman really quick and I worked my way up and I’m regional vice president for Walters Buildings.

The Villa Grove car show.  Stephen pulls in more cars than most, and it’s a block from my house! <laughs> I can take all three to that show and I have a private bathroom facility! The Villa Grove show is one of the better shows in the area.

I tell everyone that these are my 401k.  I don’t have much money but I have hot rods! <laughs>