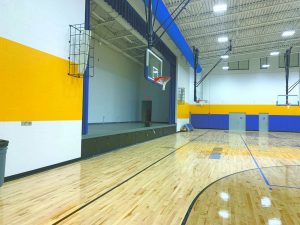 Photo: Kendra Hennis
An inside look at the new Villa Grove gym, featuring a large stage. 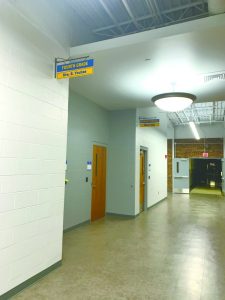 Photo: Kendra Hennis
A look at the new fourth grade classrooms in the new building at Villa Grove schools.

By Kendra Hennis
The Villa Grove Board of Education held their monthly meeting on September 21, 2020. The meeting was called to order at 6 p.m. with board president Jim Clark and member Jill Stevens absent, both joined the meeting later.

The meeting began with public comment from Andrea Burris, who has two elementary-aged children. Burris presented the board with some of the problems that she and her family were facing with remote learning. Currently, students have a limited amount of time to complete assignments. This makes things difficult for parents, like Burris, who work all day and then have to begin homework with their children after dinner. She said that she wants to help the kids but the expectations of remote learning days made things very difficult. Burris suggested to the board that they instead switch to some kind of weekly cycle, but ultimately said that she would like to see students return to in-person learning all five days of the week.

Following, the board began the budget hearing with the tentative school budget publicly displayed. Superintendent Carol Munson said that there were no amendments from the presented budget, but that there would likely be a lot of changes throughout this year that will be entered as amendments at the end of the school year. With no further buisness, the board moved to the consent agenda.

Following approval of the consent agenda, the board then discussed upcoming election information. April 6 is the upcoming election for the Villa Grove Board of Education. Interested applicants can pick up packets from the school or the Douglas County Courthouse. September 22 was the first day to file a petition and interested applicants must receive signatures from 50 voters. Final packets must be filed at the Douglas County Courthouse by December 14.

Superintendent Carol Munson then gave her report to the board. She began by saying that she too would like to update Villa Grove’s remote learning plan for the upcoming quarter. Munson said it was important that they addressed the struggles that students and parents are having with remote learning, and that in-person learning is very important to a student’s education. It was asked how they could assure that students were able to social distance at full capacity and Munson replied that American Academy of Pediatrics only advises a three-foot distance between students and that they could guarantee four-foot distance between students. She also said that they would have to figure out alternatives for lunchtime as now students are able to be spread throughout the school after walking down with their trays to get their lunch. Amid the challenges, Elementary Principal Bobby Beck commended how well the students have been doing with masks and social distancing and masks.

There is not yet a plan for students, but with the board’s approval the administrative team is able to meet with the Remote Learning Committee to develop a plan for students. Munson said that their goal is to get kids at school with their teachers five days a week at some capacity that meets the guidelines given to them by the Illinois Board of Education. Students will still be given a remote-learning option, with the chance to change after the quarter. The last day of the first semester is on October 16.

The board presented their concerns of virus spread and an increase of cases, but said that thus far they have been doing well. They stressed that this requires accountability by the staff to be proactive if they have concerns, as well as students and families to continue doing well. Ultimately, they agreed that they would like to get students back in the school all five days, so the Remote Learning Committee will be at work on a plan.

In her construction update, Munson said that the projects are coming to an end with limited items remaining. There were some minor repairs done to the new gym with doors and signs, as well as the new playground being constructed. The school was also working to come to an agreement over missed hardware pricing for the new classrooms. She also informed the board that the school had received funding from the CARES Act as well as the Digital Equality Program that have been very helpful over the last year.

Junior High and High School Principal Sara Jones then gave her report. She reported that the junior high softball and baseball teams had made it to finals and that the cross country season was going well. She congratulated Kyleigh Block for being named the Student of the Month. Jones then informed the board that Hailey Stutz’ photo was chosen for the Johnson’s Lookbook and what an honor that was. She then commended Mr. Brian Cordes and his yearbook students for their hard work with the yearbook. Jones announced that there were a lot of upcoming fundraisers and to keep an eye out for those. She notified the board that the SAT would be taken by some juniors and seniors on October 14. Jones ended by saying how proud she is of the kids this year.

Elementary School Principal Bobby Beck then notified the board that the virtual open house links are available on the school’s Facebook page. He said that on September 9 and 10 the school held a fire drill and that they were going to be watching a video on bus evacuations. He informed the board that MAPS testing had been completed at the beginning of the year and that the reports would be going out soon. He said it was important to complete quickly to have a benchmark for students from last year. Beck sent out a thank you to Gilles’ True Value for entering them in a grant that awarded them PPE for students. He also notified the board that the Summer Food Program had been extended to December 31 and encouraged parents to complete their weekly forms to allow them to have an estimated number of students. Beck then informed the board that the booster club had purchased new cameras that will record sporting events after uploading schedules. There is a subscription needed to watch the live-stream but games can be watched for free after that. It will be a couple of weeks until the camera is installed, but Beck said it will be nice if fans are not allowed or limited at sporting events this upcoming season. Beck ended by noting that picture retakes are October 8 and the end of the first quarter is October 12.

* Approved the regular and closed session minutes from the August 17 board meeting.

* Approved the regular and closed session minutes from the August board meeting.

* Approved the first reading of PRESS Plus Issue #105. Munson said that there would be a lot of changes to PRESS Plus following her conference in October and it will be revisited at the November meeting.

* Gave a tour of the new gymnasium and classrooms.

* Adjourned until the October board meeting.