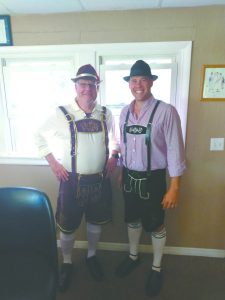 By Tony Hooker
Although the 2020 COVID-19 pandemic has caused tremendous pain and personal suffering for many, it has also been an instrument of change for many local institutions.  Most local establishments have had to take a new look at the way they conduct business.  The Tri-City Country Club is no exception. From doing curb-side delivery in the early days of the Coronavirus to modifying and updating the events that they host; the club has done what they can to adapt.  I caught up with Steve Douglas recently to talk about some of their new programs and themes.

You’ve been trying some new things since the onset of the pandemic, including yesterday’s Oktoberfest celebration.  What was the impetus behind that?

Part of it was our Board President, John Schweighart.  He used to do an Oktoberfest party at his house, and he thought “Let’s try it here.”  I really was kind of skeptical at first.  I asked him what it would be and he said “The biggest event of the year,” and I was like, “ok, that might be a little optimistic.” He wasn’t wrong.  It was by far the biggest event of the year.  It was everything from little kids to older folks.  Everyone had a good time, there were tons of smiling faces.  It was neat.

You’ve done a lot of new things recently.  You’ve got the firepit and outdoor seating. Is that all coming from the leadership of the country club?

Yes. The board has been bringing new ideas.  We had a charitable donation for some of the outside seating and we matched that.  Again, a lot of this has been John Schweighart.  He had this vision and he kept saying “we’re going to do this and we’re going to do that,” and once we got that burn pit in, it’s been excellent.  The response has been overwhelming.

Everything’s up. The golf, the social memberships, everything across the board and for this industry this is amazing. I think this year, with the virus and the kids not playing, (sports) it’s almost been a blessing in disguise.  Something good that’s come out of this whole mess is that we’ve definitely had more interest.  The golf side is way up, and no one’s been able to say that for years.

What other sorts of special events have you done?

They did a couple’s tournament that was geared toward people who don’t ordinarily come out and play.  One of whom was my daughter, and she came out and played and enjoyed it.  There were a couple of other people who came out and played.  With the outside seating, we were still hoping to do an alumni event with a welcome tournament like we did last year, which was the first time for that.  That was supposed to be for someone that you know doesn’t play golf, just to show them what we’re doing out here.  That was supposed to be this weekend, along with alumni, and we ended up with Oktoberfest instead.

What else have you incorporated?

We’ve been very aggressive on the new rates.  It’s affordable.  It cost about a quarter a day to be a social member. We’ve got a thing going where new members get 40 percent off, and you get the rest of this year, plus next year, and you wouldn’t have to renew until April 1, 2022.  It’s unlimited golf, a single above 35 is $480.  It’s really been fun.  The lady’s day has even been fun.  They’ve tried some outings and things like that and the response has been good.  They’ve had themes.  One week it was a tailgate theme.  Even that’s got better.  The men’s league had the best turnout they’ve had since I’ve been here.

Did you ever think you’d go from delivering steak dinners curbside to the crazy business you’ve been having?

No.  After 14 weeks of curbside, something had to give.  We were keeping people paid, but were treading water.  We weren’t getting ahead of anything and we were about to start getting behind.  When we opened up the outside seating, that kind of helped and then we opened up inside.  We’re still doing some social distancing, skipping some tables, and we still have the outside seating.  I think people are comfortable, knowing that they can go sit outside or sit far enough away from others to feel comfortable, or whatever the new normal is.

What’s coming up in the future?

We’re going to kind of let the weather dictate when we switch to our winter hours.  Again, we figure with the new normal, people will be playing golf as long as they can.  They’ll squeeze as many rounds in as they can.  We’ve had a few Christmas parties cancel already, but when you look at that, they’ll have a lot of people in one spot and that could leave them in a bad position.

We’ve talked about bringing a motorhome to the club and having a tailgate party for the first Illini game.

Hopefully, slowly but surely, we’re getting back to normal.