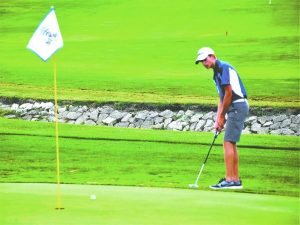 By Tony Hooker
By his own admission, Zach Buesing wasn’t a big dude his freshman year.

Zoom ahead three years however, and the VGH senior golfer had sprouted up to over six feet tall.

That growth spurt has allowed his golf game to blossom as well.  I recently sat down with the 2019 IHSA sectional qualifier to learn about his game, his future, and much more.

How long have you been playing golf?

Since I was seven years old.  I started at Arcola at a summer golf camp at Kaskaskia with Jerry Blaudow.  I don’t know how my dad found it, but I knew baseball wasn’t going to be my sport, so I decided to play golf and I was with Jerry for a couple years down there.

What is it about the game that you find so appealing?

I feel that if there weren’t any bad shots or bad holes, golf wouldn’t be fun to me, so going out there and not knowing what you’re going to get yourself into is the best part.  You never know what’s going to happen.

Do you have a favorite course?

Probably The Den in Bloomington.  Arnold Palmer played there, and they actually based the back tees off his game and his ability.  He went there and played it and said it would be a great course if they moved the tees back, and they did.  It’s a super fun course to play.

Is that where state is?

What would you say is the strength of your game?

At the moment, I feel it’s pretty dangerous. I’ve been trying to work on the things that matter the most.  I don’t really care if I play with someone who can hit a drive 350 yards.  It’s all about what they can do near the green.  That’s what I call dangerous.

For head coach Scott Gerard, it’s his mental toughness that stands out.  “Zach has a very strong will. He puts his entire being into every round. Sometimes this turns into a problem when he is not playing at his best, but overall it is a characteristic that serves him very well,” Gerard stated.

What aspect of your game do you need to work on the most?

Last year, going into different matches, I didn’t know how my short game was going to go, and this year for the first four matches, my short game has been consistent.  It’s really different from course to course though.  Some courses the greens are sitting up and I’m down low, and I’m not used to that, but that’s one thing that’s been really reliable. The short game’s been a life saver.

Gerard concurs.  “Course management is important for any player to get to the next level. There are so many variables in golf, and the better you are at juggling them the more consistent you will be. The short game (100 yds and in) and being able to consistently hit irons to specific distances are also high on the list for getting his game to the next level.”

Your freshman year, what were you shooting?

Now you’re consistently in the 30’s.  Do you think that’s a maturation thing or did you dedicate yourself to it?

Dedication. If you want to get out there and get looks, you have to go earn it.  It’s the same thing for every sport.  You can’t just snap your fingers and it will be right there for you.

Again, Gerard is on the same page as his star player.  “Experience through competition is giving Zach more confidence, which is key. You have to believe in yourself, believe you can hit the shot. A while back we also implemented a couple swing drills/thoughts, which have gotten him on a more conducive swing plane. These changes, through lots of practice and repetition have become “muscle memory” for Zach and are paying dividends,” Gerard emphasized.

Your freshman year, you were just out there putzing around a little bit?

That’s what I told everyone on the golf team, your freshman year, you’re just out there to have fun, and that’s what I thought I was going to do all four years of high school, just go out there and have fun and if I shoot a good score that would be great.  It all started to change at the end of my sophomore year when I shot a couple of 42’s.  I thought “that’s pretty good for a sophomore,” and maybe I can really get out there as a junior and do something.

Of course, you also had a growth spurt somewhere in there, right?

Do you think that helps your game?

I do.  Having long arms and having length.  I have a strong core, but that helps a lot.  It’s about when you can let it all go. It’s not about how hard you swing but about how you can get your hands behind and through at impact.

Have you thought about playing golf in college?

I’ve thought about it, but what I want to do right now is stay at home. I want to work, because I have a really good job right now.  If it happens, I want to play two years at Parkland and go to school.  Get into precision ag or Construction management.

Have you played with Michael Holmes?

Oh yeah, we are good friends.  We played in the club championship and the Douglas County championship together.  I love his dad. (Jeff) His dad was the person that gave me the swing I needed to hit and just told me to hit it.

How did you do in the tournaments?

I shot 79 at the club championship and 79 and 76 at Douglas County.

Did that get you on the leaderboard?

Yeah, got second place in A flight.  They accused me of sandbagging. <laughs> It’s hard to play against guys like Toby Ring and Jason Watson or Michael Holmes. Guys that are two handicaps. You know that if they mishit a fairway or something that they’re going to bounce back.

Is there a girlfriend?

There’s not.  I feel that as much as I work now, it’s going to get really hectic here in the next couple of weeks with the harvest, and with as much as I like to play golf, that pretty much sums up my life, right now. <smiles>