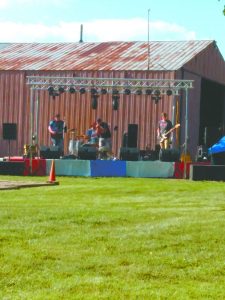 By Tony Hooker
I had to drive to a farm in Vermillion county to do it, but I heard the future of local rock music this weekend.

Ancient Ways, a new band featuring Villa Grove’s Garrett Gunter, St Joseph’s Lance Meuser on vocals, Myles Jones, from Mahomet, and Bass Player Trevor Pratt, who also hales from St. Joe, playing for only the second time in front of a live audience, put together a scorching set, featuring songs by many new artists, as well as some old rock standards and even one of Gunter’s originals.

Luckily, the internet has filled the void and allowed new bands like Greta Van Fleet, Wolf Mother and Royal Blood to thrive.   GVF even took home a Grammy for best rock record in 2019.  It’s from these roots that Ancient Ways has sprung, bridging the gap between classic rock and roll and the skillful tunesmanship of today’s acts.

The band opened the set with the rollicking Dick Dale surfer romp Miserlou which segued immediately into Royal Blood’s “Figure It Out”.  They followed with “My Body”.  Franz Ferdinand’s Take Me Out then morphed into Finger 11’s “Paralyzer”, as the band worked to find their groove.

Gnarls’ Barkley’s “Crazy” came next, followed by an ephemeral version of Radiohead’s “Creep”.  They followed up with “Milk and Honey,” an original Gunter tune, before really kicking it up a notch for GVF’s Black Smoke Rising, which allowed Meuser to put his vocal range on full display, with Gunter matching his lyrics with smoldering guitar licks.

From then on, the set began to cook, as they mixed modern rock from Wolf Mother and GVF with classic tunes.  Their rousing rendition of Rage Against the Machine’s “Bulls on Parade” inspired a mini mosh pit and got perhaps their biggest ovation of the night from the crowd, which was generally much older than the members of the band.

They brought the show to a close with another Royal Blood cut, “Little Monster,” that put a nice finishing touch on the afternoon.  All in all, they sounded really tight for a band with so few gigs under their belt.  If you’re curious about what the current modern rock scene sounds like, I encourage you to give them a listen.