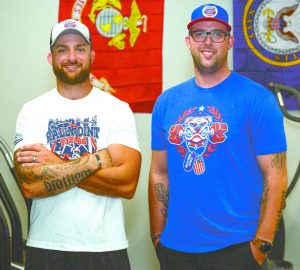 Photo: Rachel Ray
Tuscola brothers Gunnar and Ben Edwards along with Drake Todd (not pictured) will be opening Rally Point Fitness in Tuscola.

By Kendra Hennis
Fusing passions of fitness and supporting veterans and first responders, Tuscola alumni Gunnar and Ben Edwards are opening Rally Point Fitness in Tuscola. The gym, located on US Route 36,  has the goal of giving back to the community and providing a place for veterans to go and have support. The team is hard at work getting things finalized for their September 1 opening goal, but Gunnar was able to give me some more information about the gym.

Why did you decide to open the gym?

Fitness has been something very important in my life over the last 10 years or so, especially when I was deployed to Afghanistan in 2012-2013. When you are over there you don’t have much to do on your down time so I fell in love with it more while I was over there and I continued to be involved with it when I came home. My brother Ben and I talked about wanting to open a gym together about 4 years ago, but we didn’t have the money, resources, or know anything about running a business (we still don’t) but are willing to take the risk and use the resources available to us. When I became a certified personal trainer, I told my wife that I would like to work with veterans, I just didn’t know how to go about this in that profession. Well I got sober about 6 months ago after years of heavy drinking and it allowed me to reflect on what I truly wanted to do with my life, because before I would always talk about or think about making changes, but I never could when I was drinking all the time. The only thing that continued to pop in my head and the only thing I have ever been passionate about was working out, sports, and the military. So I asked my brother and our buddy Drake Todd what they thought about the idea and they liked the idea and said they were willing to help in whatever way they could. So I think it was two days later, I filed to be official with the State of Illinois jumping head first and it has just been rolling ever since.

Can you tell me some more about who your employees are and their roles in the gym?

The business is currently myself, my older brother Ben Edwards, and our buddy Drake Todd.

I served in the Army National Guard for 8 years as a sergeant and a Military Police Officer. I deployed to Afghanistan in 2012 to 2013. I will be at the gym full time Monday-Friday, starting August 24 from 7:00 a.m. to 7:00 p.m. My brother has been in the Army National Guard for over 10 years and is currently a staff sergeant and is an engineer. He will be doing a lot of the community outreach that we plan on doing as well as the marketing. Drake Todd is actually in my brother’s unit in the National Guard, so I met him through my brother. He has been in the guard for over 8 years and is a sergeant and an engineer. He will be assisting with maintenance, organization, and cleanliness of the facility to provide the most comfortable experience to our members. He is also a member of the Tuscola Fire Department.

How did you decide on the name and logo?

Rally Point just kind of came to me automatically when I was asked. Rally Point is a place everyone knows to gather or focus on in the military, so I thought it was kind of fitting to get people together at Rally Point. I wanted the logo to represent America, veterans and first responders, and my story. So, the shape of the logo looks like a badge for the first responders. The flag is in the background obviously because this is the best country in the world. And the bulldog is for my bulldog Sarge. Everyone that knows me, knows how important my dog is to me. Sarge has been with me since I came home from Afghanistan in 2013 and he has seen me at my lowest stages. Well this gym is to try to help some veterans and first responders who suffer with PTSD. Sarge helped me with my PTSD and literally saved my life when I was ready to end it. So, my bulldog Sarge is the reason while Rally Point Fitness is even possible. Also, the bulldog lets Marines know that they are welcome too.

What are some of the different services and equipment offered?

We will have just about everything you can think of or want. We appeal to every group I believe. We have free weights, machines, cables, bands and rubber tubing, TRX suspension training, kettlebells, medicine balls, cardio, boxing/MMA. We also have 15 yards of top of the line turf for athletes to utilize for agility or acceleration training. We have ropes, sandbags, a sled to do pushes or pulls and we will have a tire to do tire flips. There’s not much you won’t be able to do. We actually have so much equipment we can’t use it all, so maybe one day we can expand.

How can someone go about getting a membership?

We will have an online portal that will allow people to sign up through the software we will be running at the facility and we will give them their electronic key fob the first time they come to the gym. The gym is also now open from 7 a.m. to 7 p.m. so you can come in and sign in and receive their electronic key fob. Membership for veteran/first responder individuals is $20 a month, you can add on one additional family member for $35 a month, veteran/first responder plus entire family (up to 6 additional) $55/month. For civilians, individual memberships are $35 a month, civilians plus one additional family member are $60 a month, and entire family memberships are available for $75 a month (up to 7 total people). Members must be 14 years of age, 14-17 will need parental consent. Hours will be 24/7 for 18 years old and up. Keys will be shut off at 11 p.m. for 14 to 17 year olds.

On Facebook, you had mentioned regular meetings at Cast Iron Pub, do you have any more information about when those will start?

I still need to talk to Kenny some more on this, but I would like to start these up probably the week after Rally Point is open once we are in a rhythm. These meetings are just for veterans and the idea is to just bring vets around other people they might have something in common with. There is a barrier between veterans and civilians and a lot of veterans never find that friendship or camaraderie once they leave the service. This will be a place that if a vet wants to talk about his experiences and issues, they may, or if they just want to get out of the house around other people for an hour or two and hangout they can do that. They do not have to be a member working out at the gym to attend these meetings, just a veteran.

How did you decide on Tuscola for the location?

I decided on Tuscola because this is home. I asked around for a while about what people thought about the idea in Tuscola. There were some people who thought it was a good idea. And then there were several people who said the market I was trying to reach, being veterans and first responders wasn’t big enough in Tuscola to work. They told me to try this in Champaign or Mattoon. But this is a personal mission for me, and Tuscola is personal to me. Champaign and Mattoon mean nothing to me. So we are taking a chance and we have seen amazing support so far.

Do you have an official opening date?

We are doing everything we can to be open on the first of September. We all are staying at the gym late every night to try to get this ready for the community.

Is there anything else you would like to add?

This gym is open to everyone, not just veterans and first responders. However, you must be at least 14 years old and have parental consent for ages 14 to 17 years old.

Also, this would not be possible without my wife MacKenzie who has supported me even though this is a huge risk for our family.  We have a 9 month old daughter that I am missing out on spending time with, but my wife is holding the fort down being a rockstar. Also, a special thanks to Amy Wozniak who is staying at home with my nephew who is only 1 month old, allowing Ben to stay late and work.

To keep up with Rally Point Fitness, follow them on Facebook for the latest updates and details.