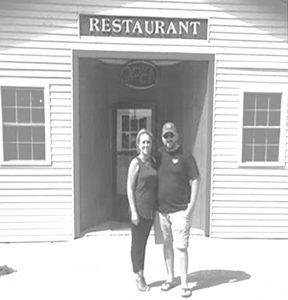 By Tony Hooker
When Ryan and Crystal Garrett host parties, their guests often tell them how much fun they had, and that they should open a Bar.

Now that the Garretts have purchased the 4 Way Stop restaurant and bar in Villa Grove, the public will soon get a chance to see why.  The Garretts, who plan to continue working at their full-time jobs upon opening the new enterprise to be called The emBARrass, recently took a few minutes out of their renovation work to discuss the new venture.

The first question I have to ask is “Why?”   What was your inspiration for wanting to get into the bar business?

<RG> The inspiration literally was a frosty cold draft beer and a burger at any time.  That’s really what it was.

And Crystal, you’re ok with this?

<CG> My husband’s crazy, but I’ll back him up in whatever he wants to do! <laughs>

<RG> We have a lot of businesses in town who do things very well.  JR’s has the best steaks around.  The Mexican restaurant has the best food around, the VFW is a great place for entertainment and a beer, but we just didn’t have a place where you could go in and get a cold draft beer and some good fried food at any time.  Everyone does something well, so we picked this little niche.

Let’s start at the beginning.  Did you grow up here in Villa Grove?

<RG> Somewhat.  I moved around a lot when I was a kid.

Did you graduate from Villa Grove?

Has owning a business been something that’s always appealed to you?

<CG> Never! <laughs> I’ve never thought of it before.

<RG> I’ve been self-employed for a long time in the insurance business, so technically I’ve kind of been.

We entertain well.  We’ve always had big parties and people would always tell us that we should buy a bar because we would do well at it.  We thought rather than paying for entertainment, we’d get paid instead! <laughs>

Let’s talk about the bar itself.  What are some of the things that are going to attract folks to your place?

<RG> We’re going to have an outdoor seating area.

<RG> The section of the building that used to house the restaurant is going to be sort of an indoor play area for adults.  We’ll have pool and darts and shuffleboard.  Like an adult Chuck E. Cheese! <smiles>

We’ve opened up the bar, taken out a wall, and that will be the main area where we’ll have people can eat.  We’ll have the big, main draft beers and then we’ll have some of the local varieties that we might switch in and out.

What do you see having on the menu?

<RG>Since we’re new to this, we’re going to keep it simple at first, with burgers, chicken strips, chicken sandwiches, Wings, and fried appetizers and that sort of thing.

Do you have any major renovations for the exterior of the business in mind?

<RG> For now, just the patio. It’s always going to be a work in progress.  We’ve got some ideas for the future, though.

How are the bones of the building?  Are they sound?

<RG> Oh yes, very good.  You have two main structures with two load bearing walls in each one.  It makes renovation really easy.  It has a huge kitchen that we’ll probably never use most of.

Are you planning on hiring staff?

<RG> Oh, definitely.  We’re planning on running it ourselves, but if things go well, we’ll definitely be hiring.  Hopefully more than we planned on! <smiles>

<CG> Once we get closer to opening, we’ll be looking to hire bartenders and cooks.

So don’t bring your resume by yet?

<CG> You can, just don’t sit and hold your breath waiting on a phone call because it’s going to be a couple of months! <smiles>

Do you have an opening date in mind?

<RG> We’re looking at the end of September or early October.  That’s what we’re shooting for.

What’s going to be the main focus of the restaurant?

<RG> The main focus here is really the theme that we originally thought of.  A cold draft beer and a burger.

<CG> The fried food also.  You can’t buy fried food anywhere in town other than the country club and you have to be a member and they have limited hours.

<RG> I think the space, with the indoor games, is another main attraction.  The idea for this came when I went to my son in law’s bachelor party in Indianapolis to a bar called “The Punch Bowl”, and they had indoor bowling and bags and it was like a big adult playground.  It’s neat, especially in an area like this that gets cold in the winter.  Everyone does something well.  You have Route 45 Wayside that has the great outdoor venue for music, but they have to shut it down for the winter.

Have there been any big surprises since you bought the building?

<RG> Everything is more expensive than we thought it would be! <laughs>

<CG> We’re not even talking about the renovation.  All of the permits and the liquor license.  We had to put a $1600 deposit down for the power company.  I hope people are excited to come, but I also hope they realize that we’ve never done this before, so don’t judge us too quickly! <laughs>

Are you going to hire an experienced cook?

<CG> Maybe.  We have someone in mind, but I don’t know how serious they are.

Have there been any pleasant surprises?

<RG> Everyone tells me that they’re excited about the business and that they can’t wait until we get open.

<CG> We really wanted to stay locally owned.  We heard that there were some big bar owners who were interested, but we wanted to keep it (ownership) in Villa Grove.

<RG> Stay tuned.  As far as major renovations, we’re going to be putting in a hallway to connect the two spaces.  Before the restaurant and bar were operated as two separate businesses, almost, so we’re going to connect them. I do want people to know that this is going to be a bar and not an arcade.  We’ve been very encouraged by everyone who has told us they can’t wait to come in.