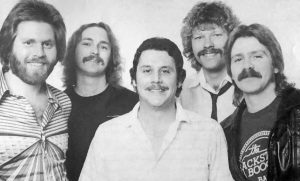 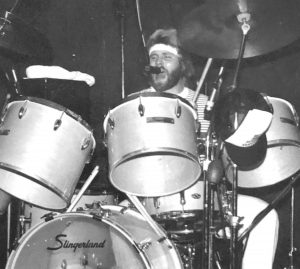 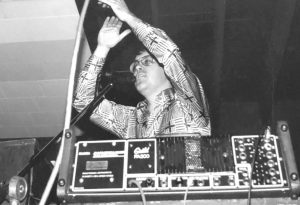 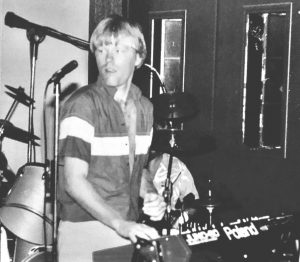 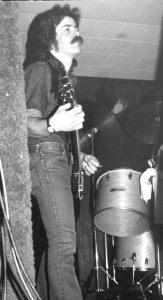 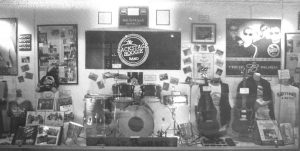 What songs make you recall the good ol’ days? “Riding the Storm Out,” “Jessie’s Girl,” “Footloose,” “Lights”? I’m sure you can think of many others. But on Saturday, August 29, 2020 you can capture some of those old songs as you listen to the Backstage Boogie Band jog all of our memories at the Cast Iron Pub tent from 7 to 10 p.m.

There’s been a few reunions of this popular band since 2004, but this one is big, number 40! And what better way to celebrate than at Tuscola’s newest downtown addition?

Alan Shoemaker of Tuscola, moved here in 1972 from Lafayette, IN and was already an accomplished drummer. He played in a few bands like Formyle Circus and Airborne. Kevin Gaddis, then of Newman, was their lead guitarist and singer in Airborne. It broke up when Kevin moved to Kansas. Alan filled in for various bands after that. He met Marty Benard of Arthur while filling in for a country band called, “Slats & the Bedsprings.” Marty and Alan became fast friends. When Alan heard that Kevin moved back to the area, he introduced Marty to Kevin. Recognizing these talents from two different musical genres, they thought they could play a wide variety of music and market a great band. It was always the joke amongst the three that it would be “a little lounge band and play a couple times a month.” The band ended up playing every weekend for more than eight years!

Mark Dunn of Newman and Susie Fuller of Arthur then joined the group as bassist and singer. Their first gig was at Manahan’s in Tolono. And the rest is history! So you ask, where did the name “Backstage Boogie” come from? They were looking for a name that referred to their song list and would be catchy on a sign. The phrase “Backstage Boogie will set your pants on fire” was taken from the song “Sweet Emotion” by Aerosmith. That was the band’s intent every night they played, to please their fans.

Marty had bigger obligations with traveling, his job and family, so he chose to leave the band. Dave and Alan ended up moving from the area. The last original band members were Kevin and Stan; and the “Backstage Boogie” disbanded in 1986.

The cases of the museum were overflowing with memorabilia displayed by Backstage Boogie Band, Gene Trimble Band, Marty Benard memorial since we lost him July 4, 2008 to cancer, and Dan Matthews’ guitar collection.

So now if you’d like to listen to some wonderful rock and roll, played by some great talent, join Backstage Boogie at their gig at the Cast Iron Pub, outside under the tent. The show will be from 7 to 10 p.m. on August 29, exactly 16 years to the day of their very first reunion show at Harvest Fest.