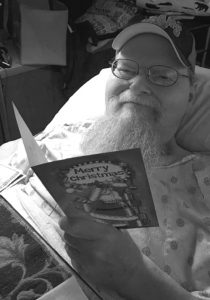 Art worked as a cabinet maker for Schrock’s Cabinets (now Masterbrand) for 30 years.  He was an avid Chicago Bears and Chicago Cubs fan.  He was absolutely thrilled when the Cubs won the World Series.  He enjoyed playing guitar and singing, fishing, being outdoors, his Harley Davidson (even though he never had a license to drive it), and spoiling his nieces and nephews.

He is survived by his brother David (Lynn) Rahn of Villa Grove, his sisters Paula Bowles (Mark Brown) of Bethany, Karla (Jeff) Wright of Bement, Catherine Rahn of Monticello, and Emma Rahn of Tuscola, many nieces and nephews, and other family and friends.  He was well taken care of by his nephew Jason Rahn for many years until the end as his caregiver.

Art is preceded in death by his paternal and maternal grandparents, his parents Norma E. and Walter J. Rahn, and brother-in-law, Homer C. Lopez.

He was loved by his family and friends and will be greatly missed by all.

A memorial service for Art will be held at a later date. Joines Funeral Home (Villa Grove) is assisting the family with arrangements.

Any memorial donations to help with funeral expenses can be sent to: Dave Rahn at the Villa Grove State Bank.