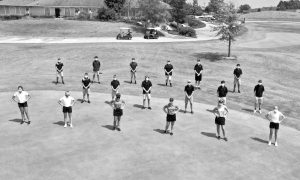 Submitted Photo
The Tuscola golf team was all masked up for their first match at Woodlawn County Club on August 17.

By Lenny Sementi
Tuscola’s golf team always opens the fall sports season and a new school year and this year it’s the first squad since late February to actually compete against other teams due to COVID-19. Toby Ring takes over the reins of the Warrior golf team this season serving as head coach for the 2020 campaign. Doug Bauer stepped aside prior to the season but will still assist Ring as meet manager for home meets at Ironhorse Golf Club.

Ring has been the assistant for numerous years and when Bauer, Ironhorse’s Pro and Golf Manager relinquished the role due to increased business at the course the choice for a new leader was an easy one.   “Golf has exploded throughout the country this summer,” stated Bauer. “The numbers at Ironhorse are tremendous, it’s far and away the best of my tenure at the course, I think people feel safe and golf is a great opportunity to be outdoors.” That statement hit home quickly for Ring as roster size is its best in recent history and possibly the largest in program history.

“We were pleasantly surprised by the number of student athletes that decided to give golf a try,” stated Ring. “We have 6 returning players and had 22 total show ups which is way from the last few years. I think with traditional fall sports pushed to the spring, golf is a way for kids to still participate in a sport.”

There will be a young squad on the girls side as seven young ladies will swing the sticks for the black and gold this fall consisting of four sophomores and four freshmen. Two scorers return from a year ago to lead the way. “Makenna Fiscus and Marley Good. Both girls were solid performers last year as freshman,” stated Ring. “They have come into this season showing great signs of potential. Freshman Zoey Thomason has shown a lot of natural talent within the first couple days of practice. She is determined to get better and always shows up with a positive attitude.”

Four letter winners make their way back to the links for the boys squad and are looking to take big strides this season. Jayden Gaines is one of those players, he finished his sophomore season as our most improved golfer and walked away with the lowest season average award,” Ring commenced.  “Another player who is showing signs of great potential is Brayden Boyer. He has put a lot of time in over the summer to improve his game. The other two returning from last year’s team are Banta and Dunn, both of which should be contributing factors to the boy’s golf squad. Freshman Brayden Gough is new this year and seems to be the most pleasant surprise. Gough shows he has a true love for the game and looks to be a natural. His desire to improve is exciting and looks to a staple for the future.

Ring sees Arcola, Villa Grove and St. Teresa has some of the top teams in the area. The schedule itself hasn’t changed much aside from a few small adjustments made to adhere to IHSA COVID-19 rules. The changes on the course and in practice are more noticeable. “Now that the IHSA has released more information, we are more clear on how to move forward. For example, we have been practicing with masks on in order to simulate how we will be asked to play in matches,” the coach said. “We are also a lot more conscious with how our practices are set up to get the kid prepared for meets. These new rules have definitely affected many aspects of the season, but our player’s health and well-being are paramount. I can’t say we are perfect, but we are trying our hardest to give these kids a full season, free of interruption.”

A few of the big differences are as follows. Players should wear masks whenever not actively playing (striking a ball). All players should be masked while walking the course and not actively play. If an individual would like to wear a mask while actively playing, they may do so. There is no prohibition on the color of the mask. Coaches should now work to create new habits including staying away from touching their face, not allowing sunflower seeds and not spitting. Do not touch the flagstick or bunker rakes, nor other player’s equipment or golf ball.

The traditional definition of holed has been modified to say: If any part of the ball is in the hole below the surface of the putting green, the ball is treated as holed even if the entire ball is not below the surface. This definition will be used for hole inserts (such as plastic piping, pool noodles, etc.) Note: If the ball does bounce out of the hole, the ball is not considered holed. Players are encouraged to keep score using cell phones or some other means in lieu of a traditional scorecard. At the conclusion of a round, a player’s scorecard is considered returned and final after all players in the group have verbally agreed to the hole-by-hole scores while at the scoring table following the conclusion of a round. Once a player leaves the scoring area, no additional change to the player’s score can be made. Failure of a player to return to the scoring area immediately following a round will result in the player’s disqualification.

In student participants, coaches, and officials are restricted to a combined 50 per wave at meets and invites. A wave is defined as an individual group (golfers, coaches, officials and volunteers). Hosts can have multiple waves at an invitational as long as the waves are spaced out so that they don’t intermingle.

Ring made a quick addition to his staff taking full advantage of daughter and EIU womens golfer Claire Ring’s open schedule this fall. Ring, an alum from a few years back, has the fall off and will serve as an assistant while she also prepares herself for competition this spring. “I may be biased but Claire has been great helping young players with instruction,” the head coach stated. “The knowledge she has and willingness to help the younger players has been a big help.”