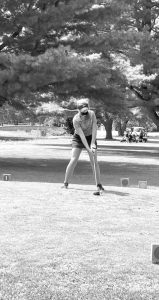 Submitted Photo
Marley Good teeing off at the Mike Hendricks Girls Invite at Woodlawn Country Club. Good finished in tenth for the Lady Warriors with a 101.

By Lenny Sementi
Tuscola’s girls golf team and new head coach Toby Ring took to the links this past Monday to kick off the fall sports season. Ring entered his two returning letter winners from a year ago in the Mike Hendricks Girls Invite at Woodlawn Country Club in Blue Ridge. Woodlawn is a tree-lined nine hole course with water in play on 6 of the holes giving it a course rating of 68 from the multiple women’s tees.

A pair of sophomores Makenna Fiscus and Marley Good made the trip north and traveled back home with some extra baggage. The duo made the most of their first athletic endeavor since their softball season was cut short in March a few days before the opener both finishing in the top ten individually collecting trophies. Champaign St. Thomas More came away with the team title in the  eight team event out dueling Monticello for the top spot.

Fiscus carded a 94 firing a 44 on the front nine playing holes 3 through 8 at two over par ending her day in sixth place overall. She paired a pair of those holes with a birdied number 8 before the turn. Good was a few back checking in at tenth overall with a 101. Her best nine was on the back where she pared three holes all par 3’s.

“It was great being back out at a high school sporting event,” stated Ring. “Overall the girls played well. It didn’t take long for them to settle in, just being out there was very satisfying for them. I know they were excited to get to compete.”

Ring, who also is an assistant coach for softball continued, “the new COVID rules were a little different but once they started playing I think they got more comfortable with a mask on and the changes. It will be a learning curve for everyone including coaches. I can’t say that it is something they enjoy but it is a necessity and something we must do to have a golf season. After having the entire spring softball season taken away it was just really great to be back at.”

Bench big in bounce back win for Warriors