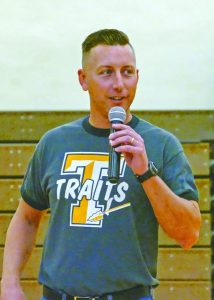 By Lenny Sementi
Tuscola Alumni and current Tuscola High School athletic director Ryan Hornaday reaped the benefits of all his hard work. He was recently named the Illinois Athletic Director Association Class 1A/2A Division 5 director of the year for the 2019/2020 school term. The leader of the Warriors embodies the IADA’s mission statement, “Taking a leadership role in athletic issues to enhance the educational process of student athletes around the state.”

“We are fortunate that Tuscola HS has Ryan Hornaday as our AD. His commitment to the student athletes in our district is unquestionable, and it is great to see that recognized by the IADA,” TCHS Principal Steve Fiscus stated. “Coach Hornaday works tirelessly to ensure our student athletes have the opportunities to excel on the court or field of play, and that they do things the right way. We are proud to call Coach Hornaday a Warrior.”

Hornaday has been donning the black and gold since 1993 when he put on his football jersey as a freshman in high school. He has led the track team for the past twelve seasons winning three sectional titles and also took home a third place trophy from the state meet in 2014. And, was part of a few state championships in football as an assistant coach for the Warriors. In all during his stint as the AD he has aided programs that have collected a total of six state trophies.

Long time girls basketball coach Tim Kohlbecker stated, “Ryan approaches his position with energy and positivity. He has always been supportive and attentive to my every question or concern and he always has student-athletes as his utmost concern. I know when I have any issue I will receive a prompt response that is researched and well thought out. My job as a coach is much smoother because of the work he does behind the scenes.”

This year is new territory for him dealing with the ever-changing landscape of high school athletics due to COVID-19 rules and regulations. It has added numerous new tasks involving new schedules for every sports team while also ensuring student athletes are able to compete in a safe environment. He has finished two of the schedules giving both golf and cross country to hit the ground running as the return to competition.

“Our student-athletes and families are incredibly fortunate to have Ryan’s leadership. Tuscola athletics are well positioned for years to come because of his vision and work ethic,” commented boys basketball coach Justin Bozarth. “It’s a well deserved award recognizing all that he does for Tuscola athletics. There’s no greater fan of all of our sports than him.”

I had the privilege along with Effingham and former Athletic Director Tony Pullen to write a letter of recommendation following his nomination and it was both easy and difficult at the same time. Easy because coach Hornaday displays so many qualities that are deserving of the award it basically wrote itself, difficult because it was hard to limit the number of those qualities to talk about.

Ryan’s moral standing and integrity is above and beyond most. He is the face of our athletic program in our community, bleeds black and gold and stands for all that is right about high school sports. He marries our schools academic, spiritual and athletic worlds together in his pursuit of bettering our student athletes and pushing them towards bigger and better things. He consistently brings back our alumni for special events honoring teams or accomplishments and also promotes those that are currently playing at the college level.

First and foremost he leads our athletic program with pride and his outlook is always looking up and forward. He attempts to secure as many IHSA events as possible even though it causes more work for himself. Giving our kids the best opportunity to be successful in the postseason and give our community the chance to embrace IHSA competition.