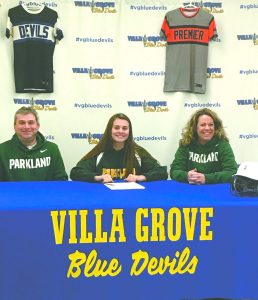 By Tony Hooker
As anyone who’s not emerging from a year long stay in a cave knows, 2020 hasn’t been an ordinary year.

This fact would seem to fit Reagan Cheely just fine, since she’s no ordinary young lady.  Cheely, a 2020 VGHS graduate who has committed to continue her softball career at Parkland College, recently took time out from her preparation to answer a few questions about ball, school, and a whole lot more.

What was the first thing you thought of when you found out your softball season was going to be cancelled?

How far could your team have gotten?

Honestly, I think we would have made it to state.

You’ve chosen to continue your career at Parkland College.  What’s it like to be recruited as a college athlete?

It was fun.  It was also probably one of the most stressful things I’ve ever been through!  <smiles> It took a lot of talks with my parents, deciding what was best for me, not only for softball but for school, deciding what I want to do.  I’m still not sure. <laughs> It was difficult, but it was also fun.  I plan on getting to do it again after two years at Parkland.

Both your parents were college athletes at Bradley, and your dad played ball at Parkland.  Were they able to help you through the process?

They were a lot of help with that.  I don’t know if they did the online emails and things I had to send to coaches to get them to come and watch me play, but they definitely knew more than I did.

So is Bradley a potential destination after your career at Parkland ends?  Do you want to be a legacy?

Yeah! I don’t really have my eyes on any school after Parkland. I want to play, but I don’t have a specific school that I’m looking at.

Do you have a general idea of what you want to study?

I’m taking an Intro to Education class this fall, to see if I might be interested in teaching, but I don’t really have anything else in mind.

You were able to play some ball up in Rantoul this summer.  How did that go?

It was good.  It was fun, but it wasn’t really the level of competition that we were looking for.

What’s your favorite memory of your days on the team?

Winning state in eighth grade was pretty fun, but last year, getting as far as we did was great.   I can’t really point out a specific game, but really all the games starting in the regionals were fun, because we knew we had a chance to go pretty far.

What position are you going to play at Parkland?

Right now, I’m a utility player.  I think I will be pitching some, but I’ll be playing wherever they need me.

Maris (Eversole) is also going to play at Parkland.  Is that cool?

Yes.  She’s already living in Champaign.  I technically moved in on July 9, but I’ve just been staying here because I don’t have all my stuff moved in yet.

What was your favorite class at VGHS?

I’d say Psychology. I liked that class. I’m taking a psychology class at Parkland and I don’t know if it’s going to be the same, but I had fun in that class.

Who is your favorite athlete?

I would probably say my dad. He’s always been out there practicing with me.  He doesn’t like to brag about himself, but people always tell me how good he was.  He and my mom are the ones who have pushed me the hardest.

How about pro athletes?  Any of them that you follow?

I used to watch Sierra Romero a lot.  She’s injured so she’s not playing right now.  I like her and her sister, Sydney Romero.  I watched them a lot on TV.

Can you pick up pointers from watching professionals play softball?

When I was younger, I used to watch Softball, but I didn’t recognize everything that I do now.  Now I can pick out their swings and things like that.  That’s how I pick who I like! <smiles>

There’s really been an explosion of division I level talent in our area over the past few years.  Why do you think that’s happened?

I think it’s because most girls are playing summer ball now, trying to improve enough to go somewhere (college) now.

Do you think that your experience on the Elite played a factor in your development as a player?

What sort of advice would you give a little girl who wants to be a college athlete like you?

I would tell them that it really depends on how badly they want it.  I think at that age, everyone wants to be a professional athlete.  Around the time I turned 16, I realized that I was going to have to work harder to be as good as everyone else.  When I was younger, I would just go out and play, but then I realized that I had to do more to keep up with everyone else.  If she was really young, I would probably just tell her to keep working hard and it would probably work out for her.

Is playing still fun for you?

Is it going to be more like a job at Parkland?

Hopefully I’ll have a nice house and family.  I’m planning on getting a master’s degree, I’m just not sure what it’s going to be in! <smiles>