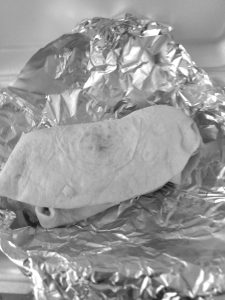 With the closing of the 4-Way stop restaurant, breakfast options are a bit limited in Villa Grove, but there is one gem, hidden at the south end of Main street where you can still get your day started the right way on Saturdays and Sundays. JR’s has filled that weekend breakfast niche, quite nicely.

Their breakfast menu serves as a perfect complement to the brontosaurus sized steaks, prime rib and pork chops they’re serving up on weekend nights, and their Friday fish fry has been a VG mainstay for years.

From 8-11 a.m. on Saturdays and Sundays, you can get biscuits and gravy, sausage links or breakfast burritos. I’ve tried all of them over the past few months, and I keep coming back to the burritos.  They offer steak egg and cheese, sausage egg and cheese or ham, egg and cheese varieties.

On a recent Sunday morning, my lovely bride and youngest offspring headed out early, so, left to my own devices, I decided to call ahead and order breakfast.  I hope the rest of my decisions turn out just as good.  I ordered the ham, egg and cheese burrito, and it was awesome!  Loads of eggs, ham chunks and cheese stuffed to bursting in an amazingly fresh tortilla.  I don’t think they make their own tortillas, but it sure tastes like it.  I added an order of sausage links on the side, and I think I could have fed the Fighting Illini with the portion they served.

Finally, on to the ratings:

Value: Five out of Four fat guys! $5 for all that food is a fantastic deal!

Friendliness: Carrying on Judie Westray’s long-standing tradition, if you weren’t family when you came in, you will be by the time you’re ready to leave.  Four out of Four Fat guys!

Flavor: 3.9 fat guys!   I wish they would offer salsa with their burritos, but the food itself is great!

Overall: 4.22 Fat guys on a 4.0 scale.  I highly recommend giving them a try some Saturday or Sunday.