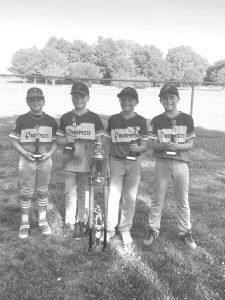 Submitted photo
Ryan Cunningham, Connor Musgrave, Evan Vearil, and Jon Pettry with their 3rd place trophies in the CIBTL tournament. The four future Warriors took to the field this summer for a newly formed 11-U travel baseball based out of Ivesdale, Illinois.

By Lenny Sementi
Four future Warriors took to the field this summer for a newly formed 11-U travel baseball based out of Ivesdale Illinois. Ryan Cunningham, Connor Musgrave, Evan Vearil, and Jon Pettry were big donors to a successful end of the season run by the Illinois Prospects.

“Our mantra is Athletes first, Winning second, striving to win on the Diamond and In Life,” stated Prospects head coach Jerry Reeder. “I could not be more proud of our group of boys, they lived up to that and then some. They joined a new club, functioned within the guidelines of the COVID recommendations without complaint, took some hard hits, and learned some big lessons while dealing with adversity the entire way.”

Reeder, a 40-year veteran of the coaching profession, had stints at Eastern Illinois University, University of Evansville and University of Illinois during his long career on the diamond leaned on the Tuscola crew to support all aspects of the game, including the battery, outfield and infield positions. Cunningham set up behind the dish and threw a game in their end of the year tournament. Musgrave fired a gem in a big shutout win over a very good Mahomet Diamond Dogs squad in their second game of the 14-team Central Illinois Travel Baseball League (Consisting of top AA and AAA teams from the area). Petry patrolled the outfield and was a big bat in the middle of the lineup while Vearil took up residence where needed playing both in the infield and outfield depending on pitching rotations. The duo provided big hits in a win over the higher ranked diamond dogs and west division second seed Olympia in the semi-finals of the consolation bracket.

All four found their way on the base paths in the final game of the season in a 13-6 victory over the tourneys top seeded Chatham Braves. “These boys beat the top seeds from the West division to finish third in the CIBTL tournament,” stated the coach. “Not many thought we’d end up here after their spring season was all but lost due to COVID-19. But the league gave us an opportunity to grow and improve when Illinois moved to Phase 4 of the Reopen Illinois on June 26. Their spirit, perseverance, and trust in our coaching staff are to be admired – the future is extremely bright for the Illinois Prospects.”

Tuscola provided a pair of assistant coaches to the mix as well in Dan Cunningham and Scott Musgrave. The pair joined with Reeder, and support staff in adhering to a safety protocol that had designated areas outside the dugout six feet apart for each player to hang their bag and place a lawn chair, once the game started three players were allowed in the dugout and playing area (hitter, on deck batter, and the batter in the hole in the dugout). No personal contact was allowed – high five’s, chest bumps, ect.- between players and/or coaches. No sharing equipment, no drills requiring players to stand in line, while doing their best to require social distancing.

This group is a few years away from donning the black and gold but head Warrior baseball coach Adam Carver has to like what’s on the horizon. All four took big strides in their development from beginning to end and will be a big part of the Prospects as they move forward.