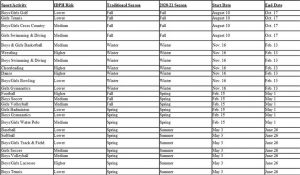 By Lenny Sementi
On July 14 the Illinois High School Athletics Association deferred to the Illinois Department of Public Health and the Governor’s Office on all COVID-19 issues and return to play guidelines moving forward.  The 29 of July Governor JB Pritzker announced during a late morning press conference before an awaited announcement from the IHSA later on that day that high school sports, youth sports, and adult recreation sports will be restricted due to the pandemic starting on August the 15.

Pritzker stated the restrictions would be based on three tiers of risk (low, medium and high) that were sport related with four levels of action allowed as approved by the IDPH. Currently the state is at level 3, which allows intra-conference, or intra-region or league championship games for low risk sports only.

Then in the afternoon of that same day the IHSA Board of Directors released a modified schedule for the 2020-21 school year that provides a framework for student-athletes, coaches, athletic directors and officials to begin planning for the year ahead.  As of now only two sports at Tuscola are affected football and volleyball both of which will be moved from fall to spring.

“This plan, like nearly every aspect of our current lives, remains fluid,” IHSA Executive Director Craig Anderson said in a news release. “Changes may come, and if they do, we will be agile while putting safety and students first.” IHSA boys and girls golf as well as cross country will still be played in the fall beginning on August 10 as planned with competition versus Central Illinois Conference opponents and other districts in our geographical area deemed by the state.

Schedules will continue to be assessed throughout each season the shortened season dates and risk levels are as follows. Providing State series remains a priority of the IHSA board and will be made on a sport-by-sport basis as the school year progresses.

Following are the coach’s thoughts following the announcements. Cross Country Head coach Mike Rosenbaum stated, “The season is going to look a little bit different, but our first practice begins next Monday, and we’ll begin getting ready for races just like any other year. I’m very happy with the decision, spending time and developing kids is why we do what we do.  Coach Crutchleys (assistants Adam and Maria) and myself are excited for the season to begin…we’ve had a very productive summer with the kids, and we’re looking forward to watching the work come to fruition.”

Head golf coach Doug Bauer kept his replay short and sweet “I’m extremely grateful to have a season this fall and any challenges it may bring.” Both fall sports could see additional names on their rosters, as football and volleyball players will now have the opportunity to swing a club or run the trails at Wimple Park.

Long time girl’s basketball coach Tim Kohlbecker chimed in, “I’m just pleased we get to have some semblance of a season. I feel for the spring sport athletes and coaches and hope there are other options or solutions for their situation.”

His counterpart on the boys side head coach Justin Bozarth went a little deeper.

“We are incredibly grateful to have a plan. The IHSA had a difficult task when you look at the amount of sports and activities that fall under their umbrella. In the beginning, I made the mistake of just considering what Tuscola’s seasons could look like. You lose track of the IHSA having to make decisions based on schools our size as well as schools with thousands of students and many more activities. On top of that, the IHSA doesn’t have the resources to fight any litigation when making these difficult decisions. When it comes to Tuscola athletics, I’m thrilled that the plan allows all of our athletes to participate in all of their respective sports. In some cases, our kids may be able to do more sports than they’ve ever done before. In short, at the end of the day, our kids and coaches have a schedule that allows us to get back to competition and I couldn’t be happier for our kids to have the opportunity to resume these activities.”

“Football in the spring will have a different look to it for sure,” stated Andy Romine. “I’m just glad our kids will have a chance to play.”

Baseball coach Adam Carver who’s sport, like softball and track, was cancelled this past spring was quoted as saying, “I think it’s great that they are trying to get all sports played for 2020-2021, but it shouldn’t be at the expense of the original spring sports. Baseball, softball, and track already lost a full season and shouldn’t have to suffer through having the shortest season of all the sports. Two events per week are quite restrictive, and I am hoping by the time May comes around, they will change that to allow for more games to be played. The only benefit I see is that we will get to play in warmer temperatures. They better give the football players ice skates for their first month of practice/games.”

Track coach and Athletic Directory Ryan Hornaday gave a perspective for both positions. “As an AD I feel absolutely terrible for our traditional spring athletes. They lost all of last year and are getting approximately a quarter of a season this coming school year.  A typical softball or baseball player competes in roughly 70 games over the course of their junior and senior season. This year’s seniors will play a total of about 15 games to account for their last two years of high school.”

“In a typical year, our track and field athletes that do not play basketball start the indoor season in mid-January and conclude in late May. So you’re talking 18 to 19 weeks worth of training and competitions. In the current scenario, we’re looking at 8 total weeks. To state the obvious, our track and field athletes will miss out on a significant amount of opportunities (for the second year in a row). Very disappointing.”

On July 23, ahead of the Governor and IHSA’s announcements the IESA board overseeing Junior High School activities cancelled all sporting activities. But on the 31, they did an about face stating, “We do not like reversing decisions but in this case we felt the information that became available warranted a review. Golf, softball, baseball, and cross country will be allowed during the fall, ultimately approving the resumption of a regular season of sports deemed low risk and a plan for the rest of the school year.”

East Prairie girls basketball and track and athletic director Beth Pugh has been coaching since 1984, and 1992 in Tuscola and is set to retire following the school year this change gives her a few more chances to don the whistle.  “I’m glad the IESA took the time to reconsider their decision on sports for the 2020-2021 season. These are very hard decisions with no previous years to give guidance to those making the decisions. There is not a perfect solution, but I am glad they are giving the athletes and coaches a chance to play and coach. We all need to work together, give a little to each other in their sports and we can make this happen.”