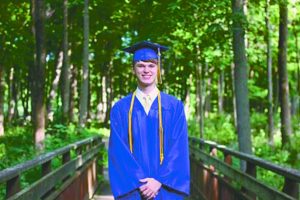 Well, consider the fact that the VGHS class of 2020 just celebrated their commencement on July 26, in the bleachers at Russ Ghere field, in 90-degree heat, rather than in May, in the friendly confines of the newly air-conditioned gymnasium. For Jackson Wiessing, class Valedictorian, it was just good to be able to gather as a class and celebrate one more time. I recently caught up with him, to hear more about that experience, his high school career and plans for his future.

What was it like having to wait until the end of July to go through commencement?

I didn’t think it would happen. I thought it would be cancelled, so I was glad that it took place.  It was a nice ceremony.

Were you nervous about having to give a speech?

I’ve been through a speech class, and I was more nervous about those speeches than I was about this one, which feels weird because my speech class was like twenty people! <smiles> And this was in front of a few hundred.  I just looked down at the paper.  There was no grade for eye contact on this one!

How would you describe your senior year?

I’m not the most sociable person to begin with, but the first part started out normal, obviously, and then the second part was…it was just truncated, basically.

You were able to go to nationals in scholastic bowl after your state competition was cancelled.  Do you want to talk about that a little bit?

It’s not the same organization as scholastic bowl, it’s quiz bowl.  It’s a little more “game showy”, but it’s the same thing. You bring people together from across the country, usually in certain regions. This year, we entered in the Washington, D.C. National Academic Competition and competed over Google Meets against all the Northeast schools.

How did your team fare?

We got to the playoffs and didn’t have to face the number one seed! <laughs> We lost in the first round.

But you had to win matches to get to that point, right?

Yes, we won five out of six matches to make the playoffs.

You’re talking about really old, established private schools in the Northeast that you were competing against, right?

Greens Farms, out of Connecticut. (a quick google search shows Greens Farms annual tuition at $48,000 for the 2020-21 school year)

What would be the highlight of your high school career?

Probably that and doing well in New Orleans the year before.

Where do you think the motivation to excel academically comes from?

I just always kind of expected it, to be truthful.

Did your parents beat you over the head with a textbook or something?  <laughs>

I’m told I used to be a terrible student.  I used to refuse to do homework in fifth grade! <smiles> As I grew older I just couldn’t see myself not doing well.

What are your future plans?

I’m going to the U of I to study Computer Engineering.

What is it about Computer Engineering that appeals to you?

I like to work with my hands, the feeling of knowing that you made a connection.  I like to see things work, that feeling of accomplishment.

What was your favorite class in high school?

Really?  Are you close to being fluent?

No! <laughs> It’s more of a cultures class.

Are you going to live in the dorms?

I am.  I’ve got my roommates assigned.

Are they from big towns?

What would be your ultimate career end goal with a degree in Computer Engineering?

I would like to end up doing research, but who knows what that will be in four years.

Was there anything about high school that you didn’t like?

I had an hour-long bus ride.  I could have done without that. <smiles> Everyone in school was cool.

What would you tell younger students who wish to follow in your academic footsteps?

Don’t sacrifice yourself to reach your goals.

What do you like to do outside of school?

Are you any good?

What kind of music do you play?

What kind of “axe” are you grinding?

I have a few.  I have one that has a computer in it so you can change the tuning and it will emulate other guitars.

Are you going to participate in College Bowl?

I’ve heard that exists, but I don’t really see room for that anymore.  At that point, it’s really going to be about learning how to do stuff and not about memorizing facts.

Have you thought about any other extracurricular activities?  Are you going to try to join a band?

I’ll try. I’d love to join a band, but it just takes finding the right group of guys.

Are you bitter about the way your senior year has gone?

It is what it is. You can’t really be mad at a virus.

Where do you see yourself in ten years?

Hopefully with a good job in a city.

Are you considering grad school?

It’s about 50/50, because if you get good internships you can get a great job with a bachelor’s degree.