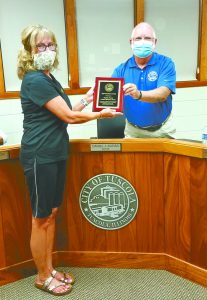 By Kendra Hennis
The Tuscola City Council meeting was called together at 7:30 p.m. on Monday July 27. All board members were present with council member Dave Slaughter joining via Zoom. There were no public comments to be read.

The council met the last two executive sessions to discuss potential land acquisition and pending litigation of the land East of the Community Building (120 W North Central) owned by Tuscola Police Chief Craig Hastings. City Administrator Drew Hoel said, “proposed terms are a purchase price of $59,500 with the possibility of what would happen if we were to sell the structure, proceeds of that sale would be split with the seller for five years as well as the rights to salvage if we demo the property.” On that, City Attorney Andrew Bequette said, “I just want everyone to realize that the city of Tuscola is buying property from it’s police chief. We want to do that openly and up front but it’s the property downtown that the city has been wanting to control the interest in for many years. The purchase price I believe is a little above what it was appraised at, but I don’t think it’s beyond the bail. Particularly when you look at the fact that for better or for worse, this alley ends up paying a little more for things than private citizens might. But, acquiring the property at this price, on these terms, is certainly cheaper, quicker, and friendlier than doing an eminent domain action, which can take an extremely long time and cost a lot of money. As I said, the city will control varied property downtown as the city prepares for its future. But, we’re announcing this publicly tonight, if anyone has a public comment, we ask you to participate in public comment at the next meeting. The council is not voting on this tonight, they will vote on it next meeting. I think it’s a good move for the city but that the people should know what is happening.” Kleiss noted that the property is a part of the plan that they rolled out five years ago. They have already demolished three properties and it is a part of the city’s goal for a comprehensive plan for the downtown area. Hoel noted that it is the only parcel in that entire half block that the city does not own.

Mayor Kleiss then presented council member Phyllis Truitt’s letter of resignation to the board, which said, “Dear Mayor Kleiss and fellow city council members, it is with mixed emotions that I offer my resignation from the Tuscola city council, related to my cross-town move out of my ward. I have enjoyed my years of serving the city, and I have learned so much while meeting and working with colleagues that I now call friends. I appreciate the wonderful people who have worked in city offices for all these years, and the help they provided me. I am proud of our many accomplishments throughout the years and the progress we’ve helped bring to this town that I love so much.” Kleiss thanked Truitt for all of her help and support in her twenty-eight years on the council. He said that she has been a wonderful asset to the council and the city as a whole, and noted how much she was appreciated and would be missed.

* Approved the minutes from the July 13 regular board meeting.

* Approved street closures of Main and Houghton from 11 a.m. to 12 p.m. for the Tuscolians for Racial Justice March on August 8, 2020.

* Approved writing off the uncollectible accounts receivable in the amount of $24,309.37 dates back to 2001.