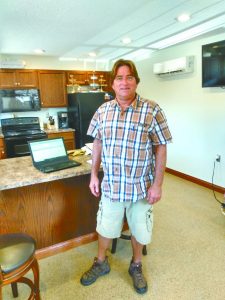 By Tony Hooker
Contrary to popular belief, tax assessors don’t hang upside down in caves and swoop in in the dead of night and levy their decisions.  Local tax man Neal Wood laughs at that notion.

In fact, they’re local residents, who are often elected to their positions. (They also can serve as an assessor at the township level on a contractual basis, as well.  Wood does both) Mr. Wood, who farms with his sons and sells real estate in addition to performing his duties as assessor, recently took time out to talk about how he goes about his business.

How did you get involved with tax assessment?

The long-time assessor before me, Jim Young, was a local farmer who sold real estate and was the assessor.  I watched him break his life down into parts, and managed his time very well while doing it, and so when he got ready to retire I thought it was something that I could do, because I sold real estate, and I farmed a little, and it’s worked out well.

Let’s start at the beginning.  Are you a local guy?

I grew up in Edgar County and married Shelley Bosch, from Newman.  This is her family’s hundred-year family farm that we’re living on.  We’ve lived out here for 20 years, and we’ve farmed it for 35.

Do you have any kids?

We have three adult children and six grandkids.  Two of my sons are active in farming.

What kind of background does it take to do the job of assessor?

I think it takes knowledge of the area and its economics and being able to keep up with continuing education.  Out of all county officials, including townships, we are the only ones besides State’s attorneys and judges who have to have a certain level of education.

Is there a resource for you to go to regarding assessments?

Up until the Covid-19 pandemic, the Illinois Department of Revenue was the best resource we had.  They still answer emails, but that contact with them isn’t there for right now.

What goes into your decision-making regarding tax assessment?

It starts with a building permit, through the township, the county or the city.  I’m elected in a multi-district township assessing district, and it’s Newman, Sargent and Bowdre, and then I’m contracted in Camargo.  Then, I’ll go out and do a hard sketch and then I’ll put it into a system known as the Vanguard Appraisal System.   It’s a mass appraisal system that the counties pay for, and then we can continue through a minimal fee each year.  You load a parcel into the program, each township is different.  Then, if someone has added a building, so you can go in and sketch it and from there you can email it directly to the county. Then I add photos, and then we go into valuing.  Then you add the building and the properties start to build value.  The values are based off of sales ratio study, with three years of data.  We’re always behind by a year, so 2019 values were based off of ‘16, ‘17 and ‘18 data.  This program is very accurate.

So the Vanguard program puts all the formulas?

It’s only as good as the data you use, but it’s amazing in its accuracy.

I think there’s a misconception about how you determine property values.  There’s no guesswork involved?  It’s all technical in nature?

The only human information includes the square footage and styles.  You can tweak it, of course, but this program does it itself.  I tell property owners that it’s (the value) data driven and it’s all right here.

Just like any business, it’s not pens and paper anymore.

How does having wind turbines on your property affect the amount of taxes levied?

The wind turbines are assessed per megawatt.  The assessed value will be added to the total EAV (equalized assessed value) in the Township in which they’re located.  Then your taxing bodies, schools, fire, library, etc. will levy their amount and receive their percentage of the added value, in addition to the taxes on the land itself.  (For Villa Grove, the breakdown of the total tax bill is approximately 55 percent for VG 302, 16 percent city, 11 percent county, 6.5 percent Parkland, 5.5 percent township roads, 4.6 percent township, 3.2 percent library, and .2 percent for Douglas County Historical Museum)

There’s a misconception that ‘the city’ raised our taxes, and that isn’t correct, right?

No.  Any time they want to raise taxes, it has to go before a vote.  They can’t just start raising taxes.

Everything has a purpose.

Honestly, these days you can almost sell a house without leaving home, almost.  You can do it by your phone.  I’ve done contracts on a combine before.  <smiles> I sold one house without ever personally meeting the seller.   I went and looked at the house of course, but he was in Tennessee.

How long have you been the assessor?

I’m ending my second term, so it will be eight years when we go into another caucus in December.

Has it changed much in 8 years?

The county has changed a lot of their staff over the years, so they’re in the process of training their personnel.  So the assessors have been asked, and by rights they should be, to do more of the valuing and the sketching and everything.  In small counties, it’s not uncommon for the assessor to go out and do a hand sketch and take it to the county office and have them do everything else.  Lately, and I like it, it’s going well, they’re letting the assessor assess. As a local assessor and realtor, I know the area really well, so I know if something doesn’t look right?  Some properties are extremely valuable in our county, but you have to use common sense.  A local guy can look at things and know that if a commercial building in downtown Newman is valued at $100,000, something is out of whack.

There’s a difference between the assessed valuation and the market value, right?

Right.  Assessed value is one third of the fair market value.  Market value is basically what the Vanguard software is saying, right now, using good data.  There have been many times that a home has sold above or below the Vanguard valuation.

Is there a cycle for all of this?

Yes, you should be in a quadrennial, because every four years, your supposed to have looked at every property.  It’s tough, especially with the Covid-19 pandemic.  I like to do my assessments when everyone is away, or at least when there’s an adult present, because you are looking at the property. You’re nosing around, in the backyard, measuring and taking pictures.  They have the right to keep you off the property, but then I would have to assess you from the road, so it would be an estimate, so your data is already skewed.

Other than building a building, is there anything that you look for?

When I go out and look at a property, I take this (indicates laptop with vanguard software) along.  It’s sad, but decks that are mounted to the house are accessible.  New garages or any added square footage to the house are accessible.  You have to look for changes like that.  Central Air Conditioning is accessible.  In Douglas County, a paved driveway is accessible.  People don’t want their taxes to go up, but they want to get the best value when they sell it, so there has to be a happy medium, and that’s where I think a local assessor comes in, because he knows the market and he knows what’s going on.  Assessors are just the beginning of the equation.  I go out and set the values, and those things are sent to the county and inputted. Then you add things like levies for the schools and everyone else, and then you have to come up with a tax rate.  I’m just a starting point, the ending point is the Treasurer.  She sends out the bill.