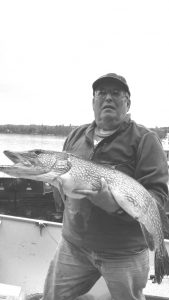 A funeral service was held at 7:00 p.m. on Wednesday, July 22, 2020 at the Joines Funeral Home (1375 N St Rt 130) in Villa Grove, IL; Father Walder officiated.  A visitation was held an hour prior to the service. Burial followed at the Centennial Cemetery in Villa Grove.

Michael was born on December 1, 1957 in Chicago, IL to Frank and Dora (Vazquez) Lumpp. He married Brenda (Oakley) Lumpp on July 4, 1995 inJacksonville, AR.

He is survived by his wife, Brenda Lumpp; a brother, Tom Alderson; a sister, Thais Lamkie; two niece’s, Megan and Cindy; and a great niece, London.

Michael retired after 24 years of active service in the Marines and Air Force in April of 2002. While in the military he received two Meritorious Service Medals and made sure our planes stayed in the skies. After he retired, he moved back to his home state, and then attended Illinois State University in Bloomington.  He graduated from ISU in December of 2008 and worked as an accountant until he passed.

Michael was an avid fisherman and looked forward to every spring vacation with the Gustafson family in Kenora, Ont. He loved history, politics, and his one regret will be becoming a Democrat after he dies. He was a beloved husband to Brenda, and a devoted uncle to Megan.

In lieu of flowers, memorial donations may be made to the Wounded Warrior Project.