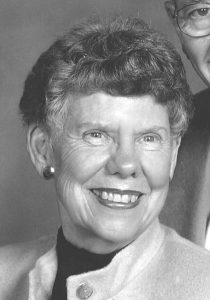 Jean Ellen Kennedy Jones died July 10, 2020.  Jean was born March 28, 1931 in Tuscola, IL, the daughter of Grace (Thomason) and Martin B. Kennedy.  She was a member of Forty Martyrs Catholic Church in Tuscola where she was also married to William C. Jones on September 12, 1953.

Jean graduated from Tuscola High School.  She attended Saint Mary-of-the-Woods College in Terre Haute, IN before obtaining her degree in the School of Music at the University of Illinois. She was a member of Sigma Alpha Iota Music honorary and was named the outstanding voice major in 1952.  Jean was a member of Chi Omega Sorority where she was the song director of the University of Illinois Sorority champion choral group.  Jean performed at over fifty weddings, for the service men at Chanute Air Force base during WWII, and for the service men at Fort Knox, KY.  She sang with the Chicago Symphony at the Chicago Civic Opera House and she performed at the St. Louis Muny.

Jean was an accomplished horsewoman and was the 3 gated national champion in 1949.  She won at the International Livestock Exposition in Chicago along with championship classes at the Indiana, Kentucky, and Illinois State Fairs.  Her interest in horses continued into adulthood where she and Bill owned two quarter horses which won classes at the World Championship Show in Oklahoma City.

She was an avid Illini fan, loved musicals, attended as many of her grandchildren’s events as possible, and was the hostess to over twenty large parties at her home.

In lieu of flowers, the family requests that memorials in Jean’s name be made to The School of Music, The University of Illinois Foundation, 1305 West Green Street, Urbana, IL 61801 (https://music.illinois.edu/giving).

A celebration of life will be held in Tuscola at a place and time to be determined.

Condolences may also be sent to Bill Jones at Brookstone Estates in Tuscola, IL