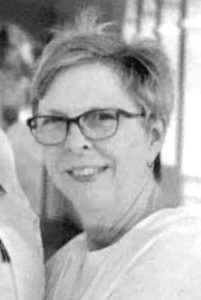 Private family services were held on Saturday, July 18, 2020 at the First Christian Church in Arcola, IL. Burial was in the Arcola Cemetery. Memorial service will be held at a later date. The Edwards Funeral Home is assisting the family.

Nancy was born on February 4, 1953 in Tuscola, IL. She was a daughter of William A. and Harriett P. (Teel) Herrington. She married her high school sweetheart, Richard L. Mathias, on September 10, 1971 in Arcola, IL.

She is survived by her husband, Richard of Arcola, IL, her daughter, Nichole Gomez and her fiancé, Thomas Otayco of Columbus, OH, two sons, Bill Mathias and his wife Shelly of Carolina Beach, NC, and Jeff Mathias and his wife Ellen of Arcola, IL; four grandchildren, CJ Gomez and his wife Stephanie of Columbus, OH, Mikey Mathias of Cincinnati, OH, Kaylee Mathias of Vine Grove, KY, and Joshua Mathias of Arcola, IL; three great-grandsons Carter, Clay and Carson Gomez; one sister Georgia Mullikin and her husband Doug of Chesterfield, MO; niece Carey Portzline and her husband Scott of Grand Rapids, MI; nephews, Eric Mullikin of St. Louis, MO and David Herrington and his wife Jeannette Shelton of San Jose, CA; two great-nephews and one great-niece.

She was preceded in death by her parents, one granddaughter, Emilee Mathias, one brother, David Herrington, nieces and nephew, Angela Herrington, Michael Mullikin and Cheryl Mullikin.

Nancy graduated from Arcola High School in 1971, where she met the love of her life and husband of nearly 49 years, Richard. For 37 years she served the Arcola Community Unit School District. She received IEA/NEA Regional Recognition for outstanding dedication to public education, IASB and Senate Recognition for her service. After retirement, Nancy continued serving her community through her work at Carriage Crossing Senior Living Center.

Nancy had a passion for photography, which she enjoyed with her best friend, Cindy Williams. She also had a flair for decorating, like her mother and sister. She enjoyed travelling, especially to Fort Myers with her husband.

Her family was her heart. She was a light to all who knew her and will be so greatly missed.

In lieu of flowers, memorials may be made to the Emilee Mathias Scholarship Fund.