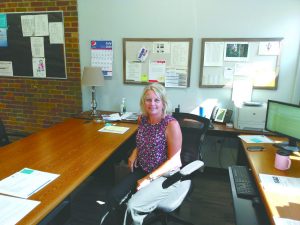 By Tony Hooker
Some folks seem to know what their career will be.

Others tend to start down one path, only for fate to intervene and send them off on a completely different tangent.

Count Carol Munson, the new Superintendent of Villa Grove Schools, among the latter.  I recently caught up with her to discuss how she came to be where she is, and a great many other things.

Mrs. Munson, where did you grow up?

I grew up in Hammond.  I went to Atwood Hammond Schools, which isn’t too far from here.

When did you graduate?

How long did you know you were going to be a teacher?

I knew shortly after college.  I went to the University of Illinois and I was in Kinesiology/Bioscience, going on more of a physical therapy route.  When I graduated, I needed a stats class before I could begin physical therapy school, and while I was taking the stats course, my former high school principal reached out to me because he needed a junior high basketball coach in St. Joe Ogden, so he asked if I would be interested.  I did that for a year, and I absolutely loved it.  It really changed everything, and I decided that I really needed to be in education.  I’ve always liked school. I’m still in school! <smiles> From that point, I re-enrolled, got my teaching certificate and that’s really where it all began. I’d always been active with kids, babysitting and helping out with summer camps when I was younger, so I was always in touch with education and kids.

When and where did you start teaching?

I started teaching in Decatur in 1997, I believe.  My first two years were at a neighborhood school in Decatur, and then an opening happened in my hometown, so I applied for that and I was there for six years, all the while still in school, I had gone back to get my master’s.  I didn’t know at that time that my interest would be in administration, so I had to go back once again and get that degree, and once I did, I got a job as high school principal in Lovington and I was there for four years.  At that time, they began the merger of Arthur and Lovington schools and I helped with that transition.  Then a job opened in Tuscola, and I took that because they were still up in the air as to what was going to happen with all the administrators in Arthur and Lovington, so I made the move to the middle school, and I was there for nine years.  I had such a wonderful experience that it really made me want to continue on.

I’m sure that you had other opportunities.  What made the job at Villa Grove so compelling?

There were others out there, so I was very selective about where I wanted to work.  I’m just really small town at heart, that’s where I’ve grown up.  I just think that there are a lot of things that small towns have to offer.  Sometimes we can’t offer things in the way of programs that larger schools can but on the other side, they offer so much more in the way of life.  I’ve had family here in town, and I’ve gotten to know some of the teachers here in the district and I’ve known Bobby (Beck) and Sara (Jones)  through conferences and things like that, so I felt like I had a feel for what their values were, what life here in Villa Grove was like, so I felt like it would be a very good fit.  I knew I was ready to start pursuing a superintendency, but I loved where I was, so I didn’t feel that I needed to make a move unless it was right, and I was willing to be patient about that.

What’s your favorite part about being in administration?

My favorite part is really about affecting things on a bigger scale.  With being a principal, you still had that contact with the students and got to work with teachers.  I really, really like mentoring, whether it be mentoring students or mentoring younger teachers and things of that nature.  Things like that are what I really like.

What’s your least favorite part of being in administration?

Sometimes you have to make difficult decisions based on what’s good for all, and nobody likes that.  I think we’re kind of realizing that now, living through the pandemic.

Speaking of the pandemic, have there been any decisions made about what the fall semester will look like?

There haven’t been any specific decisions made.  We’re going to talk to the board on Monday night. (July 20) We have a plan that we like, but again, it’s still to be discussed with the board.

Have there been any surprises?

One thing that has been surprising is the level of support I’ve felt, both from the staff here at Villa Grove and from the community.  Also, the area superintendents have been really good about reaching out.  We’ve had more contact because of the return to school planning, but they’ve all said to contact them if I need anything.  They all remember their first years as superintendent.  <smiles> All of the teachers and staff have been amazing.  I couldn’t have asked for a better reception.

Do you see anything that you might want to adjust, moving forward?

This is something that I’ve been discussing with the board.  I’m not going to start any major changes at this point.  Right now, I’m just going to be watching and evaluating things.  Once we get the Covid-19 and the building project behind us, then I think we’re really going to start looking at programs and instruction and seeing what we can do.  There are a lot of great people here, and I think that there are things that we can do moving forward.

Speaking of the project, are things still progressing on time and on budget?

So far, yes! <smiles> A lot of that is a credit to the school board and Norm Tracy.  They worked on this for a quite some time, so at this point I’m feeling very good about that.

The doors will be open in August?

The classroom will be done in August, and the gym is scheduled to open in mid-September.  I think there’s a plan in place because it’s the hundredth anniversary of Villa Grove School, so they want to tie into that in some way.  It’s pretty amazing.

How long do you see yourself doing this?

I can see myself probably finishing out my career in the superintendency.

Can you tell me a little bit about your family?

I sure can! <laughs> I’m married to Craig Munson. He works for Nutrien Ag Solutions.  They were out of Oakland, but they’re now out of Kansas, so we’re kind of in opposite directions.  We have four children.  Our two oldest boys are 25 and 23.  My son Colson just graduated from Tuscola high school, and then we have a daughter who’s going into seventh grade at Tuscola.

What do they think of mom becoming a superintendent?

<Laughing> My daughter is happy to see me go because I was the administrator in her building!  They’re very happy for me.