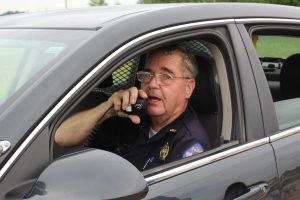 By Tony Hooker
For over three decades, retired Villa Grove Police chief Dennis Gire served his community. I recently sat down with the VGHS grad, to talk about his plans for retirement, what he would miss about the job, and what he wouldn’t.

So, Chief, for over 30 years, you mostly flew under the radar, and now that you’re retiring, you’ve become a media darling of sorts. What does that say to you?

It’s been nice to have the attention, I guess, but it’s slowing down now and it’s about time for me to fade into the sunset! <smiles>

Do you think the attention is a product of you spending almost three decades on the job?

Yeah. I think I’ve been the longest running Chief that Villa Grove has ever had. When I first started, Eddie Von Lanken would come in and give me tips, and they were good ones!

Now that you’re off the job, what’s the weirdest case you ever worked?

The strangest case would have to be the guy that had all the bombs in Perk’s Trailer Park. He was going to blow up his employer the next morning, but we got a tip as to what was going on. There were so many agencies there. The State Police, the ATF, I think the IRS was even involved. We investigated for a week, and they had a bomb sniffing dog that found explosives in his trailer, buried in his yard and all around. We found all of them and no one got hurt, thank goodness, but that was the weirdest case I ever had.

What are some of the good stories that you can share from almost 30 years on the job?

Oh yeah, there are plenty of lost dog stories. Once I got a call from a lady out on Hayes road that there was a strange dog out in her yard. He liked to go for car rides, so I opened the door and he hopped right in. I took him to the State Bank and got him some doggy biscuits and then found his owner and took him back to her. The best thing about being on the job is when you run into someone that you arrested 20 years ago, and they tell you how they’ve turned their life around. They always remember me being respectful when I was arresting them. They often say, “I didn’t deserve to be treated so nice, because I was a little jerk.” One guy has a successful construction company now. I had one girl who was hiding under a bed at her friend’s house and we got into quite the wrestling match. She was quite the juvenile delinquent at the time. I ran into her at Circle K a few years ago and she had the cutest little girl with her. I asked her who it was, and she said it was her daughter and that she meant the whole world to her, and that she had turned her life around and was working full time, now.

It’s got to feel good, knowing that you’ve had a positive impact on lives, even when you’re doing your job, and arresting someone, right?

What’s been the biggest change in three decades of law enforcement?

Technology has been the biggest change. The new rules and regulations have made it no country for old men, so it was time for me to bail out. I don’t see it getting any better. We’re going to have to start going to sensitivity training. Years ago, right after 9/11, we went through NIMS training, and to me, it was basically them saying “Get along with your fire department.” I always got along with Ross (Elston, former fire chief) and I didn’t need 200 hours of training to tell me that we controlled the traffic and they (FD) fought the fire. <smiles>

Do you remember the big Main Street fire? Were you involved in that?

I got called out for that one. It was about 5 o’clock at night, as I remember. The two arsonists were there watching the whole thing, asking questions about how it started. I think they’re still paying restitution.

What are you going to miss about the job?

The wintertime, because you can go out and patrol and do traffic and not be bothered. It’s gotten so much worse. People are complaining about things they never used to complain about. Especially during the summer months, we have a lot of juvenile crime. It’s pretty much non-stop. In the winter, we could go a week between calls. In the winter, we can just drive around, doing traffic, waving at people.

What are you not going to miss?

Are there advantages to being chief in the town you grew up in?

Knowing the people you’re responding to is a total disadvantage. It’s like secretary Beth said, in this job, you learn things about people that you wish you never knew. 90 percent of the time, when you get a call, it’s because someone is in some type of crisis. It’s really bad when it’s someone who has never had to call the police before, and it’s gotten to the point where they really should have called the police earlier and maybe we could have circumvented a lot of things.

Are there more calls today than when you started?

Our juvenile calls have really picked up, lately. Now mind you, it’s really only the same 4 or 5 juveniles, but it’s constant. We always see an uptick in juvenile crime in the summer. I’m surprised that we didn’t see an uptick in domestic cases during the lockdown, but I’m afraid we’re going to see an uptick, and domestic cases are just the worst. Usually, with domestic cases, Douglas County automatically sends someone, and it doesn’t matter which town it’s in. If they hear a domestic, they’re going to come and help you. The problem is that they might be in Arthur, so for the first twenty minutes, you’re on your own.

Why did you become a police officer?

I always wanted to be a cop; from the time I was 8 years old. My dad lived on Route 36, East of Camargo, and I was always fascinated by the rotating lights on the car, back when they had them. There was a deputy named Russell Helm who was a nice guy, but he was strictly business. He always had a big German Shepherd with him, too. I learned a lot from him, and then I started riding with Gene Wigal, a Douglas county deputy. Then I kind of forgot about it for a while. I didn’t really start police work until I was 32.

What did you do before that?

I drove a propane truck for Thermogas. I replaced a guy who drove his propane truck around the railroad gates in Arthur. They fired him immediately and I got the job! <laughs> My boss, Dennis was a really good guy and I learned a lot about leadership from him. He would do everything he expected his employees to do, and I’ve tried to bring that with me to my job as Chief. He taught me to never expect anything out of my employees that I wasn’t willing to do myself.

What advice would you give to someone who is interested in a career in law enforcement?

Honestly, I’m not sure why anyone would consider it today. One of the nicest things about Villa Grove is that about 90 percent of the city wants a police department and they’re behind it.

Do you think the pendulum of public opinion will ever swing back in support of police?

I think it will. Right now, it’s anti-police, but I think it will go back when people realize that we have to have the blue line of defense.

Flooding and your water well/septic system

Support your Local Honor Guard at SavMor May 13